The Al Fateh Mosque in Juffair is one of the major tourist destinations in the Middle East. Every year, thousands of religious devotees and tourists flock to see it.

The mosque is located close to the King Faisal Highway at Manama by Juffair. This is right next Manama. All the Bahrain roads head to Manama, so the mosque is impossible to miss. You can get there by taxi or renting a car.

Coming from the highway, the mosque rises high above the verdant greens around it. The towers and the dome are without doubt its most impressive features. The dome weighs 60 tons. This masterpiece is made entirely from fiberglass. 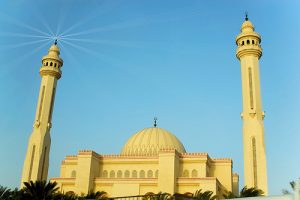 The mosque is very near the Royal Bahraini Palace of King Hamad ibn Isa Al Khalifah. The structure is particularly stunning in the evening.

The Al Fateh Mosque in Bahrain is one the largest mosques on the planet. Such is the size of the mosque that it can hold nearly 7,000 people inside. It is also the biggest place of worship in the country. The mosque was created by Sheikh Isa ibn Salman Al Khalifa in 1987. The structure was named in honor of Ahmed al Fateh. He gained fame for conquering the land.

At over 660,000 kg, the dome is recognized as the biggest fiberglass object in the world. Today, the Al-Fateh has the National Library. This was first opened to the public in 2006.

At the east of Manama is Corniche al-Fateh. This is a seaside promenade that provides a nice view of the city. From there you will see airplanes coming and going. The site has lots of sisha bars and entertainment for kids.

Not far from the mosque is the Pearl Monument. This statue has come to symbolize Bahrain. The Museum of Pearl Diving is also an important historical site. This was the Bahrain Courts’ first ever center.

The Al Fateh Mosque in Bahrain of course, is primarily for Islamic worship. However, the beauty of the place has enticed tourists from all over the world. The mosque is open to visitors except on Fridays and special holidays.