Al-Messilah Beach is one of the biggest and most frequented beaches in Kuwait. There are several beaches in the country, but this is the one tourists frequent due to its beauty. 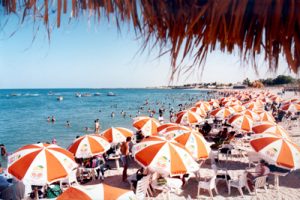 The beach is located about 350 meters off the Fahaheel Expressway. It goes up to the Messila coast. Messila is a district and you can find at the Mubarak Al-Kabeer Governorate.

The pure waters of the beach is the reason why people go there often. The clean and beautiful blue sea is ideal for swimming. The beach has white colored sand, perfect for building sandcastles. You can also stroll on the beach and just enjoy the view.

The Al-Messilah Beach is also known for its lovely skies. Whether you visit in the morning or the afternoons, you will be treated to a spectacular display of colors in the sky.

During the 3rd century BC, the ancient Greeks took control and colonized the island of Failaka. Failaka makes up the coastal area of present-day Kuwait. Under the rule of Alexander the Great, the land was renamed Ikaros.

The name was probably derived from Icarus. In 127 BC, Characene emerged, which today makes up the borders of Kuwait. The city would go on to play a vital role in trade at Mesopotamia to India. It would go on to make facilities for Susa at the River Tigris.

Modern Kuwait was established in the 18th century by the Bani Utbah tribe. During its foundation, the country was known as Guraine. Initially, the term Kuwait was applied only to the Guraine port.

During the 1920s and 30s, Kuwait’s economy almost collapsed as the pearl fishing industry suffered with the emergence of artificial pearl cultivation. But in 1938, oil was discovered, revitalizing its economy. Oil has made it a prosperous nation.

There is no entry fee required to enter the bach. A trip to Kuwait will cost around 1000 USD.

The multi-level swimming pool is one of the most popular attractions in the beach. This was created especially for its visitors who want to take a dip in its waters. For those who want to stay a while, there are many hotels and accommodations nearby.

If you are going to Kuwait, the Al-Messilah Beach is one of those places you will have to visit. it is tranquil and serene. If you are looking for a place to unwind, this is the one.