The Alexandr Pushkin House and Museum is one of the most outstanding cultural monuments in Chisinau, Moldova. It is one of the country’s must-see sites.

The museum is located in Chisinau, 19, Anton Pann St. It is in the center of Chisinau in the country’s south central part. You can get there via a car or public transportation. Parking is possible only by the adjacent streets. The Chisinau International Airport is not too far off.

The complex is comprised of four buildings. The A.S. Pushkin is one of the buildings there and is the oldest. The house is made up of three rooms. It sports a symmetric facade with four windows. It has a high roof. The building outline has a somewhat trapezoidal configuration. The building has a courtyard and hallway. 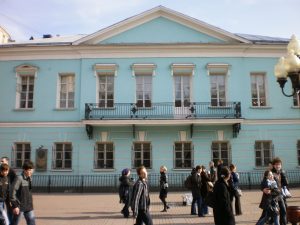 The Alexandr Pushkin House and Museum was constructed in the late 18th century. However, the work continued until the 19th century. Built by the Academy of Sciences, the complex is dedicated to the life of the man who spent some time in Moldova. Over the years, the edifice would go on to become one of Moldova’s most recognizable monuments.

On February 18, 1948, the house was converted into a museum. Even though some of the buildings were destroyed during World War II, they were renovated.

The museum admission fee is 4 Lt for adults and 2 Lt for children. However, this does not include the costs of public transportation. Car rentals are affordable. However, the roads can be rough. It is much better to use the bus or taxi.

Tour operators may include the museum in their package. But because it will include visits to other places, the price will go beyond the museum admission fee.

Since its building, the complex has undergone numerous renovations. One of the most recent took place in 1982. It was from the period September to October 1820 that Pushkin stayed at the place.

The house was originally part of the whole structure. Following the reconstruction, it was detached. The building’s shape is patterned after the streets of the 19th century. Opposite the complex is Anton Pann Street.

The Alexandr Pushkin House and Museum is open Wednesday to Monday from 10:00 am to 5:00 pm. It is closed on Tuesdays and the last Friday of every month. It is open to the public.