The Alexandre Yersin Museum in Nha Trang – Vietnam is located on 10 Tran Phu Street inside the Pasteur Institute in Nha Trang. It is one of the popular attractions in the country and is also one of the specialty museums that the people can be proud of. The museum itself celebrates one of the well-loved heroes of the country. Anyone interested to visit the museum will have to take one of the public transport options to Nha Trang.

The place is only a small museum but it does have a strong and interesting history behind it. Of course, judging by the name of the place, the museum celebrates one of the most prominent figures in the country’s history, Alexandre Yersin. Visitors can easily notice that the displays in the site are mostly in French. However, an English and Vietnamese summary is usually displayed alongside it. 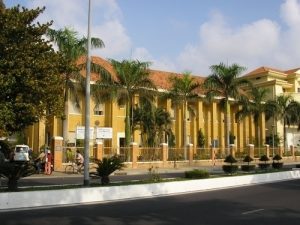 Visitors should not set their expectations that high since the place is not known for displaying or even employing today’s modern media. Nevertheless, anyone who comes through here and would care enough to learn and listen will discover the man and his enormous task of the discovering the bacteria responsible for the bubonic plague. As you might have guessed, a lot of the artifacts on display here include Yersin’s library, the many scientific instruments that were used, and the man’s personal desk.

Alexandre Yersin Museum in Nha Trang – Vietnam owes a lot of its history to Doctor Yersin. He hailed from Switzerland but grew to love the Vietnamese people. He founded the Pasteur Institute of Nha Trang in the year 1895. Doctor Yersin came to the country in the year 1889. He worked previously with Louis Pasteur back in Paris, France. It would be easy to picture the man as the Frenchman that is most beloved by all the Vietnamese people in the area.

Other than the discovery of the microbe, which is actually rat-borne, that causes the bubonic plague, Doctor Yersin also quinine and rubber producing trees to the country. During his stay in Vietnam he learned how to speak the local language fluently. He was also responsible for the establishment of the Dalat site. At the good doctor’s request, he was buried near Nha Trang upon his death.