The Arc de Triomphe in Paris is one of the most popular landmarks in France. The monument was built to honor everyone who fought and perished during the Napoleonic and Revolutionary Wars.

The monument is in the middle of the Place Charles de Gaulle. This is at the Champs-Elysees’ west end. The Arc is the highlight of the historic landmarks from the Louvre’s courtyard all the way to Grande Arche de la Defense. You can reach the place by way of the pedestrian tunnel at the Champs Elysees’ north side. 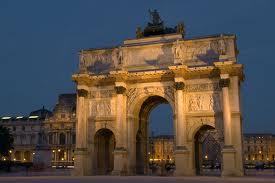 On the surface of the monument are the names of the generals who fought in the Napoleonic and Revolutionary Wars. All the French victories are also inscribed there. Below it is the Tomb of the Unknown Soldier.

Aside from the soldiers’ names, the Arc is also laden with martial sculptures and battle scenes. This includes the Rude’s La Marseillaise.

Jean Chalgrin designed the monument in 1806. Part of the concept drew inspiration from the Roman Arch of Titus. Chalgrin was commissioned to design it by Napoleon. It was meant to commemorate his conquests. Setting up the foundation took more than two years. When Chalgrin passed away in 1811, Jean-Nicolas Huyot took over. The structure would not be completed until 1836.

During the 1960s, the Arc started to blacken due to pollution from car exhausts. This was remedied by bleaching from 1965-66. This Arc should not be confused with the Arc de Triomphe du Carrousel. That landmark is located near the Louvre.

The standard admission fee is 9 Euros. Those ages 18-25 are charged 5.50 Euros. Those below 18 are free to enter provided they are accompanied by a member of the family. European citizens have free admission.

Since the Arc de Triomphe in Paris has been built, armies have used it for their victory marches. These include the Germans in 1871 and 1940. The French also used it in 1919.