Arisnal and Pal Ski Area in Andorra is a great site for seasoned snowboarders and skiers. The site is also a good choice for intermediate level skiers. 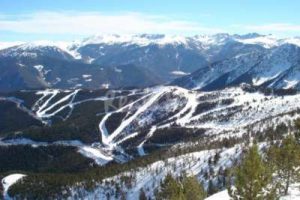 The resort runs total 63 km. There is one slalom area, 2 freeride areas, and 2 freestyle areas. There are 4 blacks, 16 reds, 15 blues and 7 greens. There are 31 ski lifts at the Arisnal and Pal Ski Area.

There are 2 baby lifts, 5 conveyor belts, 9 drag lifts, 7 chairlifts, 1 cable-car (telepheric) and 2 cable cars (gondolas). The site also has over 200 ski teachers. There are 296 snow cannons spanning 25 km of pistes.

There are two snow gardens, 12 bars and restaurants and two picnic rooms. There are also two first aid centers and 2 ski lockers.

Ski lifts were first installed in 1973 courtesy of Josep Serra. The site prospered under the Comu of La Massana. The succeeding years witnessed the rapid development of both Ordino-Arcalis and Pal.

In 2001, a new cable car was installed. This effectively joined Arisnal and Pal. In 2004, Vallnord was built. It is made up of Ordino-Arcalis, Pal and Arisnal.

The resorts are always being upgraded and new features added. The Snow Park in Arisnal now provides lunch for children. More jumps and rails have been installed for beginners. The piste has been widened and fitted with cannons. It is now possible to ski into Arisnal.

During summer, the ski resort is turned into the Vallnord Bike Park. One of the biggest bike circuits in Europe, it is comprised of downhill and cross country circuits. The runs are divided into the following: 2 very difficult, 7 difficult, 6 medium and 2 easy runs.

The Arisnal and Pal Ski Area cable car can have some long queues at 9 am and 5 pm. It is best to get there early.