The Bahai Temple in Delhi is one of the most visited tourist sites in India. It is also known as the Lotus Temple and has been featured in scores of publications. 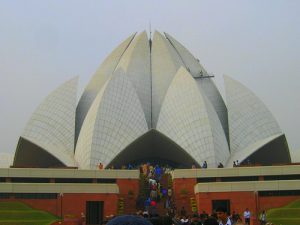 The temple can be found in Delhi. Any private or public transportation can bring you there. Its distinct flower shape makes it impossible to miss.

The shape of the temple is circular with nine sides. The layout is comprised of 27 marble “petals”. These are clustered so they make up the nine sides. Their scripture does not specifically say a dome is necessary, although all have one.

As per the Bahai scriptures, images, statues and pictures are forbidden inside the temple. In place of altars and pulpits are lecture stands.

The Bahai Temple in Delhi has nine doors. They open to the hall in the center. It has space to hold over two thousand individuals. The hall is over 40 m high. The surface is composed of white marble. The marbles were obtained from Penteli mountain in Greece. Together with the gardens and ponds, they occupy 105,000 m2 (10.5 ha / 26 acres).

Since it was built, the temple was declared open to all regardless of their religious belief. This is emphasized in their religious texts. Based on their belief, the temple (or House of Worship) is a place where all people can worship the Creator without the limitations imposed by religious denominations.

Scriptures from different religions can be read in the temple. Chanting in any language is allowed.

Prayers and readings can be done with choirs. However, musical instruments cannot be used. Since its inception, rituals and ceremonies have not been permitted. Sermons are also not allowed.

Public worship in the temple began in 1986. Since then, over fifty million people have visited it. More people visit the temple than the Taj Mahal or the Eiffel Tower in Paris. It has been estimated that 4 million visit it yearly.

Entry to the temple is free.