The Banaue Rice Terraces are vast man-made terraces built 6,000 years ago. They are officially known as the Ifugao Rice Terraces and declared a Philippine National Cultural Treasure.

There are many terraces throughout Ifugao, Mountain Province, Apayao, Benguet and Kalinga. But the most well known are those around Nagacadan, Hungduan, Mayoyao, Bangaan and Batad.

To get there, you can get a bus from Manila that heads straight to Banaue. The best choice is the Dangwa Transit. The terminals are found in Aurora Boulevard, Cubao, Quezon City and Dimasalang St., Sampaloc, Manila.

The Auto Bus line also goes straight to the province. Their terminals can be found at Espana Boulevard near G. Tolentino St., Manila. Majority of these buses depart at ten in the evening. The 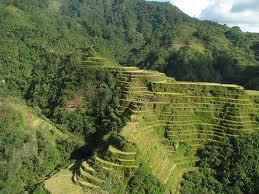 buses arrive at seven in the morning. If you are going to Baguio, there are also buses going straight to Banaue.

What to See at the Banaue Rice Terraces

Known locally as the Eighth Wonder of the World, these are set 1500 meters (5000 ft) over sea level. It spans an area 4000 square miles (10,360 square kilometers). If you line up all the terrace steps, it can encircle half the planet.

Some of them of can reach a height of 1500 m (4920 ft). Aside from the terrace, there are other attractions in the site. Some parts are ideal for hiking and trekking.

These structures were made thousands of years ago by the local Ifugao people. Sculpted from the mountain, the terraces reach down to the valley sides. The irrigation is conducted via the springs and streams. This setup allows the water to flow into the canals and into the terraces. It isn’t clear how many people worked on the site and for how long.

For thousands of years, the local inhabitants made their living planting vegetables and rice on the terraces. This is still being done today. However, majority of the locals have opted to take part in the tourism industry centered on the site.

Travel tour packages have different price tags. The budget class will cost about $60 per individual. For the mid ranged tours, the price will be $80 per head. First class sojourns to the Banaue Rice Terraces will begin at $170.

The first class trips will include transport and hotel amenities. Meals, beverages and wine will be included. Make sure you study the features of each package before paying for it.