Verona is considered asvone of the most romantic places all over the world, thanks to Shakespeare’s star-crossed lovers, Romeo and Juliet. Here is where their love story unfolded and tragically ended.

The Basilica di San Zeno in Verona – Italy also played a part in this great love story as its crypt is where the “marriage” of the star-crossed lovers took place. 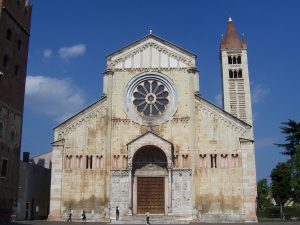 The Basilica di San Zeno in Verona – Italy is located along Piazza San Zeno, just outside the city center. It is approximately a ten-minute walk from the City Art Museum, Castelvecchio.

Flying in to Verona is via the Catullo Airport. This is approximately twelve kilometers off the city center.

From the airport, you can take a bus to reach the railway station in the city center. From the city center, you can simply walk around to explore the sights and this includes the Basilica di San Zeno in Verona – Italy.

The Basilica di San Zeno in Verona – Italy is one of the best examples of Romanesque architecture and is in fact, used as a basis for most other Romanesque structures in the city.

In particular, its Rose Window shaped to look like a Wheel of Fortune, is an early model of Romanesque architectural designs. The design was later used as a model for Gothic architectural styles.

The church has a bronze door and on its surface are forty-eight panels designed with various religious figures such as the Saints Peter, Paul, Zeno and Helena; among others.

The crypt is where the body of Saint Zeno lies and has been here sine about the year 921. The interiors are covered with beautiful frescoes that date as far back as the 12th century.

Inside is also a statue of Saint Zeno, found on the left side of the altar.

The Basilica di San Zeno in Verona – Italy was constructed some time in the 9th AD on the site of the tomb of Saint Zeno. It was along Via Gallica, a road just a little outside of the city center of Verona.

Bishop Ratoldus and Italy’s King Pepin undertook the responsibility of transferring the relics of Saint Zeno into the new church. The church however was destroyed during the tenth century when it was invaded by Magyars.

At this time, the remains of the saint were then transferred to the Santa Maria Matricolare Cathedral.

On the 2nd of May in 921, the remains were once again transferred to the original crypt where the body still lies up to this day.

An earthquake in the year 1711 damaged the church. It was later restored and was extended. Completion of the church was around the year 1398.

The cost to visit the Basilica di San Zeno in Verona – Italy is around 3 Euros. However, there is what is called as a Verona Card which allows you to visit the churches including the Basilica of Saint Zeno, museums and other sights in the city without having to pay a separate fee for each.