The coastal town of Batumi in Adjara – Georgia is the capital city of the Autonomous Republic of Adjara.

It has several attractions to offer travelers, aside from enjoying its beaches; from museums to historical landmarks, places of worship and a botanical garden that is home to thousands of various plants.

Batumi in Adjara – Georgia is located along the coast of the Black Sea, on its south-east side.

From either of these airports, you can easily take a marshrutka ride to get to the city proper.

You can also that the train from Tbilisi to Batumi.

There are beach resorts in town that you can visit to enjoy the waters of Batumi’s beaches. Most of the hotels around the city also have swimming facilities as well as tennis facilities.

Sightseeing is also a top activity for travelers visiting the coastal town of Batumi in Adjara – Georgia. Batumi has several places of worship that you can visit since it is home to several religious practices. 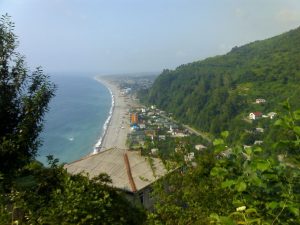 Among these churches are the Orthodox churches of Cathedral of the Mother of God as well as the Church of St. Barbara; Church of the Holy Spirit, a church for the Catholic faithful; the Batumi Mosque and the Batumi Synagogue.

There are also the Adjara State Museum, the Batumi Botanical Gardens and the Batumi Oceanarium.

The sight that is now home to the coastal town of Batumi in Adjara – Georgia was originally the sight for Bathus, a colony of Ancient Greek roots.

Batumi was under several foreign rulers for many centuries, passing from one governing body to the next until it finally became a part of the Kingdom of Georgia during the latter years of the tenth century.

However, it later on came under Imperial Russian rule which resulted in the city being annexed by the Russian Empire. It was here that Joseph Stalin resided while organizing strikes, many years before the onset of the Russian Revolution.

Today, Batumi in Adjara – Georgia is an important port in the country.

Marshrutkas to reach Batumi generally cost from 2 GEL to 18 GEL, depending on the distance from Batumi.

Train rides from Tbilisi to Batumi cost about 40 GEL for 1st class seats and 23 GEL for 2nd class seats.

For accommodations within Batumi in Adjara – Georgia, rooms cost about 18 up to 100 GEL per person, per night. The cost usually includes free breakfast.

The best time to visit Batumi in Adjara – Georgia is between the months of May and October when the weather is ideal for swimming.