Beau Vallon in Mahe Island is one of the most beautiful beaches in Seychelles. It is the largest on the island and it is the most pristine. 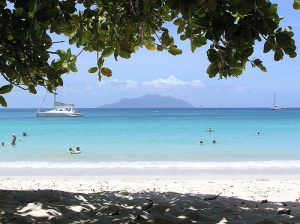 The beach can be found along the northwest coast of the island. It is three kilometers from Victoria.

From the bay, North Island and Silhouette Island are visible. The beach is very long; it goes from Meridien Fisherman’s Cove resort at the south to the Hilton Northolme hotel in the north. The waters are perfect for swimming. You can also see the spots where the fishing
boats land.

Snorkeling at Beau Vallon in Mahe Island is a popular activity. The best place to do it is at the northern portion of the beach. The areas with the giant rocks are especially suitable. Underneath the waters, colorful fish and coral reefs will be encountered at every turn.

The beach is equally beautiful during the evening. As you take leisurely strolls, you will hear the waves crashing. It can be very romantic.

The island is the biggest and most populated. Over 90% of Seychelles population lives here. As the island has become a popular tourist attraction, so has the popularity of the beach grown. There is a village nearby bearing the same name.

It is home to several restaurants including the Boathouse and La Perle Noire. Although in many ways traditional, modern conveniences abound. There is an ATM and a police station. There are also stores where you can buy food.

During the Age of Colonialism, Britain and France fought over control of the islands. Britain eventually wrestled control in 1814 during the Napoleonic Wars. The islands attained independence in 1976. But it was not until 1993 that democratic elections took place.

Vacations on the island will cost around 2,000 Pounds (two week stay). Figure spending about 1,000 Pounds or so for a week. Of course the lodging and amenities will determine the overall cost.

When strolling the beach, be mindful of the sea urchins. There are also some white crabs around. There are now several resorts and hotels nearby. What sets it apart from other islands is it is low key. There is no sense of the place being overcrowded.

Beau Vallon in Mahe Island is also a good place to sample some of the local fish and fruits. The farmers usually peddle their wares beneath Takamaka trees.