The Berca Mud Volcanoes are the main attraction at Buzau County. A botanical and geological reservation, it boasts of some unique flora and geological features. 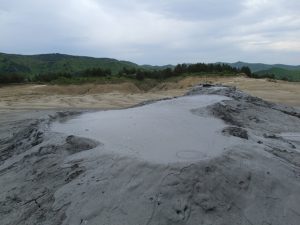 The reserve is in the Buzau mountains. This is in the Muntenia region. You can reach the place by bus, taxi or by renting a car. Berca is actually 30 km from Buzau.

The volcanoes are the reserve’s most famous feature. These volcano-shaped structures can reach a height of several meters. The mud flows and the lack of vegetation produce a unique landscape.

Some believe that the place is devoid of plant life. This is not the case. Some species like Obione verrucifera and Nitraria schoberi
thrive in the environment.

The Berca Mud Volcanoes are not volcanoes in the real sense of the word. What happens is that gases 3,000 feet below explode into the surface. It goes through the mud and clay. The explosion pushes the mud and salty water up. The material comes out of the volcano’s mouth. When the mud dries, the volcano shape is produced.

These formations are also known as mud domes. Although their appearances may vary, the principles that govern their processes are the same.

They are formed by geo-excreted gases and liquids. These domes are linked with subduction zones. 700 of these have been found throughout the world. Compared to igneous volcanoes, these are much cooler. Understanding these facts can help you appreciate the scenery even more.

Hotel rates depend on the quality. It can be as low as $65 and get as high as $150. This figure is per night at a double room. This will also include taxes and breakfast.

These volcanoes can be seen in two areas: the Big Mud Volcanoes and the Little Mud Volcanoes. Whichever one you observe, the landscape is akin to the moon. The eccentric appearance is the reason why Romanians call it “the gates of hell”. The place is also associated with malevolent forces and evil spirits.

The Berca Mud Volcanoes is one of the most popular tourist attractions in Romania and deservedly so. Although something like them can be seen in Italy and Ukraine, only in Romania can they be observed up close.