The Bjelasnica Mountain is one of the best known tourist destinations in Bosnia. Since the country started promoting tourism, the mountain has become one of its biggest draws. 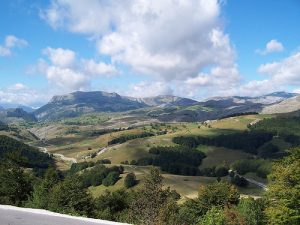 The mountain is located at the southwest of Sarajevo. It is on the border of Mt. Igman. You can probably drive to the site (it is 20 minutes away from Sarajevo), but most travel tour operators will provide the transport necessary to get there.

In addition, the site has many hiking trails. The hiking trails vary in difficulty, so there are choices available. The Bjelasnica Mountain reaches a height of 2067 meters (6782 feet). The view from the peak and near it are awe inspiring. The vista down at the forest area are also beautiful.

The area comprising present day Bosnia has been lived in since the Neolithic period. Sometime in the Bronze Age, these inhabitants were superseded by the Illyrians who were Indo-European. During the 3rd and 4th centuries, the Celts started migrating to the site. Most of the Illyrians were overran but some intermarried with the Celts.

It is known that the people living in the area spoke many languages.
But beyond that, not much is known of the period. Around 229 BC, conflict between the Romans and Illyrians arose.

It was not until 9 AD when Rome had full control of the region. During the Roman rule, Latin speaking people settled in the area. Retired Roman soldiers also made it their home.

There are many organized tours that will take you to the mountain and the villages nearby. Trekking will cost at least 135 Euros. Hiking, biking and a bit of rafting will set you back 250 Euros at least. A mountain guide costs 12 Euros.

The mountain was the host of the 1984 Winter Olympics men’s alpine skiing events. The downhill event was won by Bill Johnson (USA). To this day, the base area along the mountain still has the structures from that event. The skiing areas and hotels are still there.

The Bjelasnica Mountain is also noted for its forested base. It is here that many of the trails have been established. They are maintained continuously by the mountain clubs.