The Boat Quay in Singapore is a popular entertainment site. Aside from its many restaurants, the place also has a rich history.

The quay is located along the mouth of the Singapore River. This is by the southern bank. You can reach it by taking the Clarke Quay MRT.

The primary attractions are the bars, pubs and restaurants around it. Just behind it are the financial and banking sectors. It is the place to find expatriates, local and foreign tourists.

By taking the boat ride you can tour around the area and relish the site. The boat tour includes a guide that will help explain the historical sites and landmarks around it. Your guide can also point out places where to eat. There are also shop houses and alfresco restaurants in the area.

Some of the finer restaurants in the area are Kinara Authentic Indian Cuisine, Saffron Bistro and Dallas Restaurant & Bar. 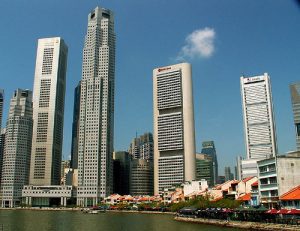 The Boat Quay in Singapore has played a pivotal role in the country’s history. The quay refers only to the south bank, where most of the trade and commerce occurred. Construction of the quay was completed in 1842.

Most of the early traders were Cheinse. Despite the poor conditions, the area flourished. Some of the items sold and bought there included rubber, steel and tin. The opening of the Suez Canal in 1869 made it more prosperous as steamships began calling the port.

Modernization in the 1960s would lead to the quay’s demise. Singapore built more sophisticated ports and it became neglected. In 1986, the country’s Urban Redevelopment Authority declared they were planning to preserve the quay and the whole Singapore River. This would lead to its redevelopment as a tourist attraction.

You can hire a boat for S$25 and take a cruise on the area.

The Empress Place is just across the river. That is where Sir Stamford Raffles established the country. Not far off are the Victoria Theatre and the Arts House.

The place was given numerous names by the early Chinese traders. This included tiam pang lo thau (“the place to go for sampans”), chap sa hang “the thirteen shops”) and chap peh keng (“the eighteen houses”).

When you are at the Boat Quay in Singapore, you may want to check out the sculptures at the river banks. These depict the activities of the traders during the 19th century.