Vientiane, the capital city of the country of Laos, has a good number of tourist spots that you can visit. There are stupas and temples, museums, landmarks and parks.

There is one rather interesting park here known as the Buddha Park in Vientiane – Laos. This is a one-of-a-kind park in the city as it plays host to various sculptures of the Buddha, among other things. 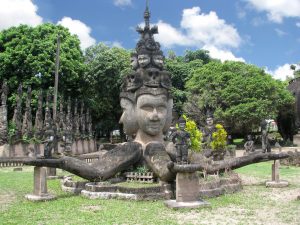 The Buddha Park in Vientiane – Laos is situated approximately twenty-five kilometers off the southeastern section of Vientiane, and about six kilometers east of the Friendship Bridge.

You can reach the Buddha Park in Vientiane – Laos via a bus ride from the city centre. Just across the Talat Sao Market is the Main Bus Terminal where you can catch a bus going to the park.

Take bus no. 14 for this trip. It will take about fifty minutes to get to your destination.

If you would like to ride the tuk-tuk, you can also rent one going to the park and then back to your hotel or city centre.

A walk around Buddha Park in Vientiane – Laos will treat you to various sculptures of the Buddha as well as several different Hindu statues. There are more than two hundred statues in all and these come in different sizes and shapes; as well as postures or positions.

There is a huge reclining Buddha – about forty meters long – lying in one corner of the park and there are also statues depicting characters from Hindu folklore.

Sculptures of animals, people and demons are also found within the park.

If you are brave enough, you can enter the giant pumpkin through the mouth of a demon head, where you can see many other sculptures, also in various positions. The giant pumpkin is divided into three sections: hell, earth and heaven.

It can be quite dark inside the pumpkin as there are only small openings around that allow light to pass through. As you reach the highest point of the pumpkin, you can step onto the viewing platform from where you can see a good vista of the park grounds.

The Buddha Park in Vientiane – Laos was created by Luang Pu Bunleua Sulilat, a mystic, spiritual leader and a sculpture, in the year 1958. He was also a cult leader that combined concepts of Buddhism and Hinduism.

After the revolution that took place in the year 1975, Luang Pu Bunleua Sulilat fled the country and sought refuge in Thailand. There, he made a replica of his outstanding feat in Laos – the Sala Keoku located in Nong Khai.

Entry fee to the Buddha Park in Vientiane – Laos is about five thousand kip per person. Use of camera is charged three thousand kip.

For a one-way bus ride to the park, the fare is around five thousand kip as well.

There is a café within the park, close to the Mekong River, where you can have refreshments and lights snacks. Restrooms are also available in the park.