The Burgos Cathedral is a Gothic-style Roman Catholic cathedral in Spain. It is one of the best known churches in the country due to its beautiful design. 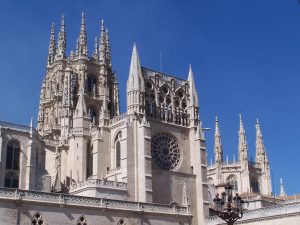 The cathedral is located in Burgos. The main facade is at the Plaza de Santa Maria.

The building style is Gothic with a touch of Baroque. Within the cathedral are priceless works of art. Among those represented are Sebastiano del Piombo (“Holy Family on a Voyage”), the grill worker Cristobal de Andino and Diego de Siloe, the well known architect.

The main facade is where most visits begin. Here you will see a rose window complete with statues of monarchs. You will also see two towers 88 m high. They are topped by spires. The use of white stone gives the Burgos Cathedral a lace-like appearance.

If you go to the north of the cathedral, you will see the Chapel of the Constable. Designed by Francisco de Colonia, it is also set in the Gothic style. The interior is well known for the pierced double stellar vault.

The cathedral was built upon the orders of King Ferdinand III of Castile. Building of the cathedral began on July 20, 1221. The site chosen used to have a Romanesque cathedral. The first consecration was on the year 1260. The next period of construction would not resume until two centuries later. Work on the cathedral was finished in 1567.

Work was completed with the installment of the lantern spire at the main crossing. A Frenchman and German were the main architects responsible for the bulk of the work.

The French architect worked on the cathedral in the 13th century while the German worked during the 15th century. In 1919, the cathedral became the final resting place of Rodrigo Diaz de Vivar (“El Cid”).

The entrance fee is 5 Euros for adults, 4 Euros for seniors and 3 Euros for students. Every second or fourth Sunday of the month (it varies) the cathedral is free to enter after 4:00 pm.

The Puerta del Sarmental is at the east of the cathedral. There you will see some outstanding 13th century Gothic sculptures. To the left is a stairway where you can gain access to the cathedral museum. There are several art pieces here.

The Burgos Cathedral is a UNESCO World Heritage Site. it continues to receive several thousand visitors every year.