The Caldeira do Cabeco Gordo is one of the most popular destinations for those who want to enjoy the natural beauty of Portugal. Though the country is not lacking in natural wonders, this is one of the most scenic. The name of the mountain / volcano means fat mountain. 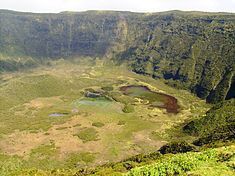 The site is in Horto in the Azores archipelago.

The mountain on this site is one of the largest stratovolcano and geomorphological structures in the country of Portugal. The volcano is approximately 1,043 meters above sea level. The caldera is 2 km wide. The depth is 400 meters under the crater rim.

From the Caldeira do Cabeco Gordo, you will see the central islands of the Azores. These include the Graciosa, Sao Jorge and Pico. There are also swamps, peat bogs and junct fields at the base of the caldera.

The Central Volcanic Complex was formed around 410,000 years ago by the western edge of the Ribeirinha Volcano. Other structures in the area were formed at the same time.

Researchers believe that Upper and Lower group formations appeared thousands of years ago. The Lower group was noted for its Hawaiian/Strombolian explosion process. This explosion was marked by benmoreitic and basaltic rocks.

The Upper group was very explosive and generated a dozen pumice deposits. The central volcano has not shown activity in the past 200 years. Due to its nature, it is a component of every parish at the
island.

The volcano is a geomorphological unit. The crate rim walls are abrupt. However, the slopes go up along with the altitude. The volcano cover is layered in pyroclastic material. These are composed of phreatomagmatic deposits and pumice rock.

At the flanks of the volcano are the Morro de Castelo Branco and peninsula. These are composed of dense material that have withstood erosion.

Usually, you will have to spend about 60 Euros. An extended guided tour with visits to all the major tourist sites will cost at least 3000 USD.

The main attractions at the site are its two volcanoes. There are also several options for trekking, mountain climbing and hiking. The beauty of the surroundings have made it a sought after destination be it among locals or foreign tourists.

The Caldeira do Cabeco Gordo is quickly turning into a premier tourist spot in Portugal. If you are interested in nature and hiking, this is the place to be.