A trip to Canterbury in England will take you back to medieval Europe. Many of the structures have been well preserved, providing the visitor a glimpse of the past.

If you are in London, just head to M2 South and East. Keep going until it joins up with A2. This joins the town with Sittingbourne, Gillingham and Chatham on the north. On the south is Dover port.

There are also two train stations: Canterbury West and Canterbury East. These are 4 and 8 minutes away from the center of the city. From London, the journey will take anywhere from 90 minutes to a couple of hours. You can also take a coach. These are available in Dover and the London Victoria Coach Station.

What to See on a Trip to Canterbury in England

The Dane John Gardens almost always has an event taking place during the summer. Most of them involve farmers selling and making food. At Main Street’s east end are subways with Canterbury Tales paintings. The Cathedral holds the remains of Edward the Black Prince and King Henry IV. It is also the sight of Thomas Becket’s murder. 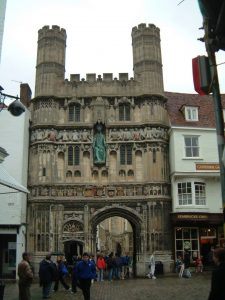 St Martin’s Church, the oldest in the UK, is also in the town. There are also the ruins of a Norman castle dating from the 11th century. One of the biggest attractions is Canterbury Tales Visitor Attraction “Medieval Misadventures.” This is a reconstruction of the UK in the 14th century. They are based on the characters of Chaucer’s stories.

The town suffered extensive damage during the Blitz of WWII. Despite this, most of the buildings have been preserved or rebuilt. The murder of Thomas a-Becket turned it into a pilgrimage site. During the medieval age, it was known as Cantwarebyrig. The town of course, is best known as the backdrop of Geoffrey Chaucer’s story which came out in 1387.

The Canterbury Tales Visitor Attraction “Medieval Misadventures” cost 6.95 Pounds for adults, 5.25 for children and 5.95 for students. 5.95 is also the charge for seniors.

If you are going on a trip to Canterbury in England, remember the following too. The admission fee is 2.80 Pounds for the Roman Museum. For a whole family it is 7.20 Pounds (2 adults, three kids).