Along the banks of the Tiber River, an imposing structure stands. This is known as Castel Sant’Angelo in Rome – Italy. Rich in history, this massive edifice welcomes thousands of visitors each year. 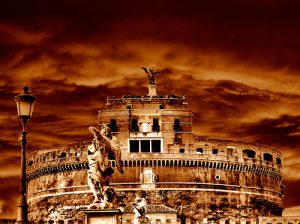 The Castel Sant’Angelo in Rome – Italy is located at Lungotevere Castello 50 on the right banks of the Tiber River. It is very close to the Vatican and is in fact just several hundred meters off Saint Peter’s Basilica.

From both these points, you are already very close to Castel Sant’Angelo.

A tour inside the Castel Sant’Angelo in Rome – Italy will take you to exhibits of various Renaissance paintings, ancient military arms and different ceramics; among many others.

The Museum is home to a vast collection of various works of art and historical relics such as those previously mentioned. The ceramics date back to the early Christian period up until the Middle Ages and the Renaissance Period.

There are also several sculptures mostly related to the Catholic faith including that of Archangel Michael and the Dead Christ.

Among the paintings that you can see here are the “Madonna Enthroned with Child and Saints,” “Saint Jerome in Meditation,” “Christ Blessing” and “The Education of Bacchus.”

Not to be missed is a climb up the terrace where you can get good views of the Vatican and the surrounding area.

The Castel Sant’Angelo in Rome – Italy was originally built as a mausoleum for the Roman Emperor, Hadrian. Construction of the mausoleum was began around 135 AD.

Emperor Hadrian died some time in 138 AD and a year later, his ashes were entombed here along with that of his wife’s and also his adopted son’s ashes. Other emperors who have died after Emperor Hadrian were also buried here.

The last known emperor to be buried here is Carcalla some time in 217 AD.

When the tomb was converted into a military fortress some time in 401, most of the tomb was destroyed. When the Goths invaded Rome in the year 537, further destruction occurred.

Story goes that the Archangel Michael showed himself on top of the mausoleum which signaled the end of the plague that hit Rome. The present name of the fortress is attributed to this legend.

The cost to visit Castel Sant’Angelo in Rome – Italy is 8.50 Euros per person. The entry fee however could get higher during special events and celebrations.

Castel Sant’Angelo in Rome – Italy is open Tuesdays thru Sundays, from 9 in the morning up to 7 in the evening. Purchase of tickets is only until 6:30 in the evening.

The castle is closed on Mondays.