The Cathedral of Saint Sava is one of the most important religious buildings in Serbia. Since it was first built years ago, the cathedral has become a premier tourist spot. 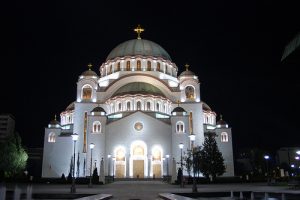 The cathedral is located in Belgrade, the capital city. Majority of public transport go to the city, so you will have little problems getting there. The cathedral dominates the cityscape, so it is impossible to miss.

The church is shaped like the Greek cross. There are four pendentives on which the central dome is set. A lower semi dome is on every side. A gallery is under each semi-dome. The dome is 70 meters high. The gold cross is 12 meters high. This makes the Cathedral of Saint Sava 82 meters high.

In 1905, a competition was held to determine the church design. Before any activity could begin, the 1912 Balkan War and World War I took place. Efforts to build the church resumed in 1919. Numerous designs were submitted in 1926.

The one chosen was the design by architect Aleksandar Deroko. On May 10, 1935, construction of the church began. The cornerstone was put down by bishop Gavrilo Dozic-Medenica.

The work continued until World War II broke out and the Nazis invaded Yugoslavia. It was in 1984 when the rebuilding of the church continued. The architect chosen was Branko Pesic. On August 12, 1985, the reconstruction started. By 2009, majority of the structure had been finished.

Going on a tour of Serbia will cost a single person about 70 to 100 USD. This will include the guide and several amenities. Week long tours are of course more expensive. Usually however, it is cheaper when touring as a group.