The Changi Chapel and Museum in Singapore details the history of the country during World War II. It is one of Singapore’s main repositories of historical facts.

The museum is at 1000 Upper Changi Road North. You can take bus 2 at Tanah Merah. Bus 29 from the Tampines MRT is an alternative option.

The contents of the museum are divided into several sections. In Zone 1 are the storyboards. Zone 2 is about the Changi Prison. The Changi murals are at Zone 3 and wartime artists are featured at Zone 4. Zone 5 focuses on the end of World War II.

The Changi Chapel and Museum has a vast collection of pictures and paintings given by POWs. Former prisoners’ personal effects are also present. The museum also has the paintings of former POW Mary Angela Bateman, who was detained during the war. 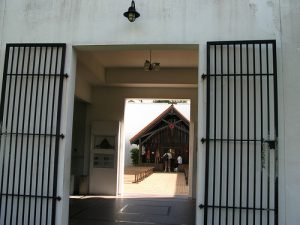 The museum also has sketches and paintings of William Haxworth. He was a POW and his work offers insights into life at the camp. His wife donated 400 pieces of his work in 1986 to the National Archives of Singapore.

A replica of the chapel and museum was constructed in 1988 close to the Changi Prison. After the prison’s expansion in 2001, the museum was moved. The museum was officially set up in February 2001. The place was re-consecrated following the relocation of the site. The chapel was constructed by hand using Tembusu wood.

Visitors can avail of a 45 minute in-house tour around the museum. You can also go take an audio tour. This will allow you to hear the experiences of people who were held prisoner during the war. Individual and shared audio sets are available

Turn off your mobile phones before you enter the museum. Eating and drinking are not allowed. You cannot bring in pets. Smoking is prohibited. Video recording and taking of pictures is not allowed. Tour group leaders, taxi drivers and guides must register themselves on the gift shop counter.

If you are going to the Changi Chapel and Museum, make sure that you follow the etiquette and guidelines stated above. You can also inquire at the reception center if there are any other regulations that must be fooled.