Corbeille de Nefta is one of the most interesting tourist spots in Tunisia. This natural depression has many features that will keep visitors enthralled. 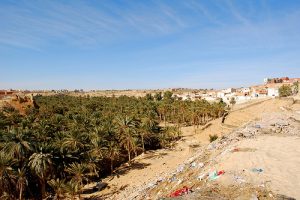 The site is at the north portion of Nefta. It is to the north of Chott el Djerid and near the Algerian border. It is 25 km/16 mi
southwest of Tozeur.

The depression, which goes down to a hundred feet, has a section where you can walk easily. Not far from it is a stream where you can go diving. The stream allows for swimming too. The town itself is set in a valley and resembles a basket.

Corbeille de Nefta is filled with palm. Its location is such that it separates the town in two parts. At its widest point it is a kilometer across. From the northwest side you will enjoy some fantastic views. The Cafe de la Corbeille has a terrace where you can view the place.

The history of the town goes way back. According to archaeologists, the earliest inhabitants of the land were shepherds from the Napata kingdom. Later on, both the Romans and Byzantines constructed forts at the oasis. These were built to shelter the area against raiders. During the days of the Byzantine Empire, Tozeur and Nefta were Episcopal Sees.

The 7th century saw the area being conquered by the Arabs. The people were converted to Islam. The succeeding years saw the city becoming a significant caravan staging point. By the 15th century, the town began its decline. This was brought about by the caravan trade fall off.

The place was also raided by numerous nomadic tribes. However, the arrival of the French in 1881 reinvigorated the town. Today, the town is considered by Sufis as the spiritual center of Sufism. There are many religious temples in the area.

The price depends on the tour package. An 8 day tour with guides, transport, food and lodging will cost at least 3,000 USD. The price hinges on the amenities and areas you want to explore.

A tour of Tunisia gives you the chance to explore its other tourist spots. The National Archaeological Museum has several artifacts and information about the country. Other interesting tourist spots are the Oasis in Gabes, Lake Ichkeul and Kairouan.

Corbeille de Nefta is a unique location. The attractions offered at the site cannot be found elsewhere, making it one of the must see places when in Tunisia.