The Devil’s Doorway in El Salvador is one of the most popular landmarks in the country. It is also known as Puerto del Diablo.

The doorway is situated a kilometer to the south of Balboa Park. It is only 7 km from the capital city of San Salvador. You can easily reach the site by car, taxi or bus.

If you are coming in from Comalapa, drive carefully. There are some people who cross the highway. From San Salvador, board bus number 12. It will take you to the site. 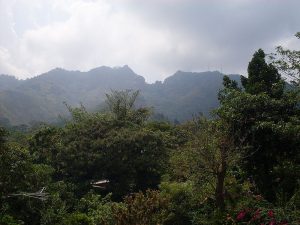 The doorway consists of two monolithic rocks positioned on the edge of a deep cliff. The doorway is atop Chulo Hill. It is 1,000 m over sea level. The doorway acts like a frame for viewing the valley under it. The rocks themselves are awe inspiring, and the view around them is even more so.

The Devil’s Doorway in El Salvador is a part of the Balboa Natural Park. From the doorway, the park is close by. The park is noted for its lush vegetation. The park covers 70 acres, so there is plenty of vegetation to see. Nature and animal lovers will have plenty to see. Rabbits, sloths and different birds are all around.

The rocks forming the doorway have been standing there for thousands of years. However, the park opened in 1949. Before the park was established, the location had to be chosen carefully. Apart from its proximity to the doorway, the area has a very favorable climate.

Situated 1070 meters above sea level, the weather is always cool. Due to the actions of nature, it is possible to view stone monuments, rock formations and other natural scenery from the park.

Plane tickets vary depending where you are flying from. When you get off the plane, a bus can fetch you and drive to downtown San Salvador (the capital).

The Balboa Park has numerous entertainment areas. There are bike lanes and soccer fields. There is also a labyrinth, castle and kids’ playground. There is also a dining place where visitors can enjoy local delicacies. One of the most popular destinations is the Maiz (corn). Delicious corn-based meals are served there.

The Devil’s Doorway in El Salvador and Balboa Park draw a lot of visitors during the weekend. Many exciting cultural events take place during these times.