Affectionately called the Most Magical Place on Earth, Disney Worlds Magic Kingdom is probably the best known of the parks of the Disney
World Resort. Some of its attractions are the following. 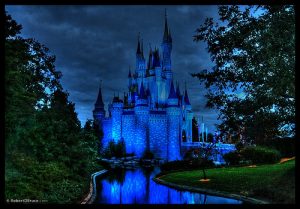 The theme park can be found in Lake Buena Vista Florida. If you are going there by car or shuttle, go to World Drive north. Once you enter the parking lot, the tram will bring you to the Transportation and Ticket Center (TTC). On-property resorts will provide the necessary transportation.

There are a million and one things to see here. Tomorrowland is futuristic, featuring spaceflight themed rides and aliens. Probably the biggest attraction here is Buzz Light-year’s Space Ranger Spin.

The medieval themed Fantasyland has Dumbo the Flying Elephant, the “it’s a small world” cruise and the Mad Tea Party. Liberty Square takes you back to colonial times in the US, while the Frontierland theme is 19th century Mississippi.

The circular section at Cinderella Castles acts as the hub of the place. From there you can reach Adventureland, Tomorrowland, Liberty Square and the other sectors of the park. There are also some shops near the hub.

Disney Worlds Magic Kingdom began following the huge success of Disneyland in California. Walt Disney purchased acres and acres of land in Florida not far from Orlando. Disney died in 1966, shortly after declaring his plans for EPCOT, the community he intended to build in Florida.

His brother Roy Disney took over and continued. Roy Disney decided EPCOT would begin at Florida. The Kingdom opened its doors on October 1, 1971 and was a huge hit.

The parking costs 14 USD per car. Guests at the resort are provided free parking. Tours of the Kingdom vary. The Family Magic Tour costs 27 USD, while the Keys to the Kingdom costs 70 USD. The Magic Behind Our Steam Trains cots 49 USD. Travel package tour costs vary.

If you want to check out the stage show performances, fireworks and parades, refer to the Times Guide and Guide Map that will be given to you after you get to the site. Check out Main Streets north end for the show times and ride schedules.

Disney Worlds Magic Kingdom has many other attractions. There is the Cinderella Castle which you will see at Main Street. You can also participate in the Mickey’s Very Merry Christmas Party (starts early November) and Mickey’s Not-So-Scary Halloween Party beginning at mid September.