Djenne-Jeno is one of the most ancient urban centers in Africa. It is now an important archeological site studied by historians and archeologists from all over the world. The commune is also known as Jenne.

The archeological site is 2.5 km from modern Djenne. You can get to and from the city by way of minibuses. There are also several taxis in the area. Another place where you can find a ride is the junction at Bamako-Mopti. There will be vehicles waiting to take you to the city.

The most famous attraction in Jenne is the Great Mosque. It is the
largest adobe mosque on the planet. This was built in 1907 over an older shrine. The mosque was built upon the instigation of the French colonial administration. 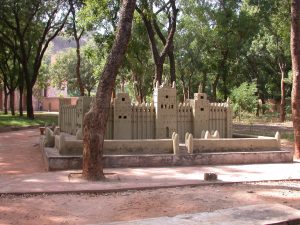 Today, there is still some debate as to how much the French influenced the design. To its south is the famous archeological site. The whole area is admired for the Sudanese-like architecture.

Archeological evidence suggests the area had been settled in as far back the 3td century BC. By 900 AD, there was already complex homoarchical urban development, plants and animal domestication. Iron production was already in place at Djenne-Jeno. Permanent settlements began in 250 BC.

From the 5th to 9th century, the dwelling places had tauf foundations. They would later be replaced by brick like materials. Islamic influence started in the 11th and 12th centuries. The evidence is the appearance of rectilinear houses, spindle whorls and brass.

The currency in Mali is CFA. Decent lodging places cost 10,000 CFA. The Hotel Djenne cost 569 but has a restaurant. Some of the higher end hotels cost 25000 CFA.

The climate is hot and dry for most the year. The hottest months are April and May. Temperatures can reach an average of 40 C. From June to September, the temperature will be slightly lower but still hot. Some rainfall may occur during this period. Temperatures drop to 32 C and below in December and January. The wettest month is early and mid August.

A trip to Djenne-Jeno is most convenient on Mondays. There are plenty of minibuses in the area. Once in there though, walking is the best method to see the whole area. Walking at a leisurely pace will allow you to admire the scenery even more.