Dublin Castle in Dublin – Ireland is a historic building in the heart of this capital city of Ireland. Its contributions to Dublin’s history, its majestic design, and its splendor and exquisite interiors make it one of the most popular sights in the city.

Dublin Castle in Dublin – Ireland is along Palace Street, off Dame Street; right within the City Centre. It stands behind the City Hall.

From Trinity College, Dublin Castle in Dublin – Ireland is only a five-minute walk away.

There are several bus routes that you can take to reach Dublin Castle. From Eden Quay take any one of these buses: 77, 77A, 56A and 79. From O’Connell Street, Bus 123 will stop right at palace gates.

The State Apartments of the Dublin Castle in Dublin – Ireland are open for public visitors. Visiting these, you can take a tour of the Throne Room, St. Patrick’s Hall, State Drawing Room, State Dining Room, State Bedrooms and the State Corridor. 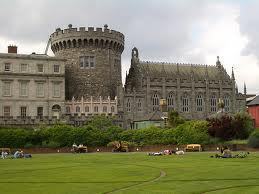 You can see the beautiful arches in the State Corridor, go through the interconnecting doors of the State Bedrooms, view pictures in the State Dining Room, regal decorations of the Throne Room and the beautifully-painted ceiling of Saint Patrick’s Hall by Vincenzo Valdre.

Dublin Castle in Dublin – Ireland was constructed some time between the years 1208 and 1220. Originally built as a fortress to protect the city, it was then later used as the seat of government in Ireland under the English and British rule.

The castle is now a major compound of the Irish government.

The castle’s architectural design is mainly taken from Norman courtyard patterns. With its majestic splendor and beautiful architecture, the castle gained negative publicity when the Irish Crown Jewels were stolen right from its premises back in the year 1907.

How the jewels were stolen and who stole them remains a mystery up to this time.

Today, the castle is used to inaugurate presidents of the country.

To gain entry into the castle, you will have to pay an admission fee of €4.50 for adults, €3.50 for students and senior citizens and €2 for children 12 years old and below.

For senior citizens and students, a valid Identification Card will have to be presented prior to paying the admission fee.

There is a restaurant, café and souvenir shop within the perimeters of the castle.