Durbar Square in Kathmandu – Nepal is a UNESCO World Heritage Site and by far the most popular of all heritage sites in the country. It is home to more than a dozen temples and statues that date as far back as the 12th century.

Getting to Durbar Square can be easily done on foot as much of Kathmandu’s tourist spots are within walking distance of one another.

From Thamel, the tourist area in Kathmandu, you can walk towards the square. You can also ride a rickshaw going to the entrance of the square.

Going around Durbar Square in Kathmandu – Nepal, you will instantly be beholden by the majestic sight of the temples surrounding the square and the statues that seem to be guarding their temples.

The Taleju Temple is said to have been the first temple to be built on the square. Story goes that the Taleju Goddess gave advice on how to build the temple and even showed herself to the king in the guise of a bee prior to the dedication rituals.

Mahendreshvara Temple was built in honor of the Hindu god Shiva. Construction was undertaken by King Mehandra Mella. However, an earthquake in 1934 destroyed the temple but soon after, it was once again restored this time as a memorial to the king.

There is also the Shiv Parvati Temple which was dedicated to Shiva and Parvati.

There are so many other temples of note that you can see within the square. Now, if you happen to be visiting during the Indra Jatra Festival, you can view the statue of Goddess Sumari which is paraded in her chariot. 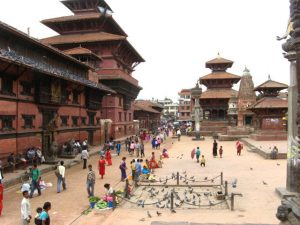 The festival takes place in September each year.

The first monuments in Durbar Square in Kathmandu – Nepal are believed to have been constructed during the 12th century. This square is only 1 of 3 durbar or royal palaces within the Kathmandu Valley.

Durbar Square is also known as Hanuman Dhoka owing to the statue of Hanuman found close to the entry point of the palace. Hanuman is believed to be the devoted monkey of Lord Ram.

The square is home to the Hanuman Dhoka Palace Complex which was the official residence of the Nepalese royalty until the nineteenth century.

The Palace Complex still plays an important role to Nepalese royalty today as this is where royal ceremonies still take place.

Dining out, you can get a good meal for only 125 Nepalese Rupee.

If you need internet connection, there are internet cafes around Thamel. Surfing for an hour costs about 15 to 20 NPR.