Edinburgh is the capital city of Scotland. It is divided into several districts one of which is the Old Town. The Old Town is the historic center of Edinburgh and here is where you can find the Castle of Edinburgh. 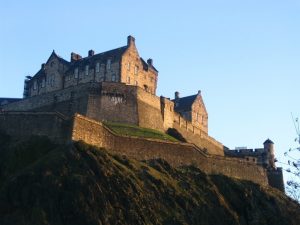 Edinburgh Castle in Edinburgh – United Kingdom is located in Castlehill, atop an extinct volcano known as Castle Rock.

Flying in to Edinburgh is via the international airport located right in Edinburgh, approximately ten miles off the western section of the city centre.

From the airport, there are buses that have regular runs into the city centre. They stop close to the Waverly Train Station; from which point you can easily walk towards the castle.

If you will be coming in from other parts of Edinburgh, the easiest way via public transport is a train ride as the main train depot, Waverly Train Station, is an easy walk towards the castle. You can actually view the castle from the terminal.

Touring the Edinburgh Castle in Edinburgh – United Kingdom will take several hours as there are plenty to see and explore. One of the major highlight for most visitors is touring the Honours of Scotland.

Inside the Crown Room where the Honours of Scotland can be found, you can view the treasures of the Royal Family; the crown, scepter and sword. These date as far back as the fifteenth and sixteenth centuries.

The Great Hall also attracts many visitors as this is where all the main Royal events took place during its heydays. The carved corbels and the hammer-beam roof are particularly interesting as the corbels are the oldest decorative carvings of Renaissance design in the British Isles.

The hammer-beam roof on the other hand, is 1 of the 2 remaining medieval roofs in the country.

The one o’clock gun, the National War Museum, Prison of War Exhibit and the rooms of the Royal Palace are also must-see sights within the castle’s premises.

The site where the Edinburgh Castle in Edinburgh – United Kingdom stands was said to have been inhabited since the ninth century. The first documentation of any royal residence on the site was during the rule of David I back in the twelfth century.

From this time on until about the year 1603, the castle served as a royal residence. The castle has had a turbulent history, having seen the conflicts of war; from the Wars of Scottish Independence back in the fourteenth century up to the Jacobite Rising in the year 1745.

The cost to visit Edinburgh Castle in Edinburgh – United Kingdom is generally around £ 14 for adults; £ 8.20 for kids and £ 11.20 for Concession Tickets.

Adults are from ages 16 years up to 59 years old; and kids are from 5 up to 15 years of age. For children under five years old, admission is free.

Concession Tickets are for senior citizens, 60 year and up; and for the unemployed.

Edinburgh Castle in Edinburgh – United Kingdom is open everyday from 9:30 in the morning up to 6 in the evening during the summer months: April 1st up to September 31st.

During the winter months: October 1st up to March 31st, the castle is open everyday from 9:30 in the morning up to 5 in the afternoon.