The Fortaleza San Carlos de la Cabana is the largest fortress in the Americas. A significant historical complex, it is now one of Cuba’s most popular tourist attractions. 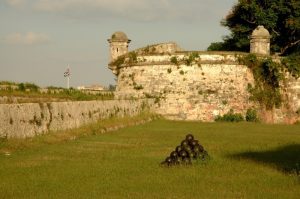 The fortress is located in the East Havana municipality. It is included among the ancient fortresses of Old Havana. The place can be reached by taxi or car.

The fortress has been converted into a historical park. There are now numerous museums in the site. Every evening at 9, there is a cannon shot at the “El Canonazo de las 9”. This is in line with a colonial tradition indicating the city wall doors’ closure. The fortress has a length of 750 meters. The surface area spans 10 hectares.

The style is eclectic. The curve flanks are French and the bastion lobes are Italian. The hydraulic works are Dutch. The crown shaped polygon is encompassed by a dry moat.

The Fortaleza San Carlos de la Cabana was constructed in 1763 upon the orders of King Carlos III of Spain. It was constructed when Havana fell to the British (Spain was controlling Cuba at the time). It was finished in 1774. It would become the biggest military base in the New World.

The complex was also used as a prison. After Cuba gained independence, its leaders would also use it as a prison and military base. In 1959, the forces of Che Guevara captured the complex. During the five months when he stayed there, (January to June 1959), revolutionary executions took place.

Taxi fares from Havana center cost about 25 CUC. Cheaper ones are available but they are not legal. Regardless of the journey length, the fare will be 1 CUC every kilometer. Renting a car will set you back CUC 65 a day at least. Refundable deposits commence at CUC 20.

You also have to factor in the cost of gas. Gas costs CUC$ 1.00 / liter. Bike rentals cost CUC$ 4.00 / day. Biking is very popular because of the scenery.

By 1859, the fortress had 1300 individuals. In times of war this could be bulked up to 6,000. The complex was equipped with over a hundred howitzers and cannons. Its reservoirs ensured it could resist a year of blockade. Along with the Three Morro Kings Fortress, they make up the Military Morro Cabana Park.

The Fortaleza San Carlos de la Cabana is open everyday from Mondays to Sundays from 10:100 am till 10:00 pm.