The Galapagos Islands – Ecuador are comprised of nineteen islands and over forty islets. Traveling here is especially popular for those who enjoy diving and snorkeling. 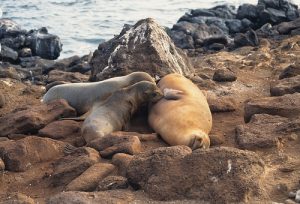 The Galapagos Islands – Ecuador are within the eastern section of the Pacific Ocean, approximately nine hundred and seventy-three kilometers off the western parts of the South American continent.

From mainland Ecuador, the easiest way to reach Galapagos Islands – Ecuador is via the airport in Guayaquil and the airport in Quito. Daily flights leave in the morning and return flights are in the afternoons.

On the other hand, private yachts are also a good way to reach the islands albeit rather more expensive. There are five ports spread out in the islands.

Getting around the islands on the other hand, is done by boats only.

Diving in the Galapagos Islands – Ecuador is the main attraction for tourists from all parts of the globe visiting the islands. Diving and snorkeling are particularly best in the beaches of Santa Cruz and San Cristobal.

You can avail of daily dive tours from several dive operators in these two parts of the islands. For live-aboards, the best islands for these are Darwin Island and Wolf Island.

Diving down the waters of the islands, you will see many, colorful schools of fishes and a wide variety of sea like including reef sharks.

The magnificent white sand beaches here also provide tourists with plenty of opportunities to come close to sea lions, sea turtles, pelicans, iguanas, flamingos and gulls; among many others.

Now if surfing is also on your list, you can visit the main beach of Tortuga Bay whose waves are famous among surfers.

Surrounding the beaches are various wild plants that are endemic to the Galapagos Islands – Ecuador.

The Galapagos Islands – Ecuador was visited by a young naturalist by the name of Charles Darwin during the 2nd voyage of HMS Beagle. While the voyage was originally planned to last only two years; this extended to almost five years; from December 27, 1831 up to October 2, 1836.

The voyage took Darwin to the coasts of South America whereupon he landed on the now famous Galapagos Islands – Ecuador. It is during this trip that he studied the endemic flora and fauna of the islands.

It was however in the year 1684 when the very first nautical chart of the islands was drafted by privateer Ambrose Cowley. He named most of the islands after the names of pirates in his company.

Visiting the Galapagos Islands – Ecuador does not come cheap. Flights going to the islands are roughly around $422. Park entry fees are about $100 per person plus you need an INGALA Tourist Control Card to be able to visit here; and this costs about $10.

Since boats are the only means of visiting the different islands, these normally come as cruise tours; and a cruise generally costs about $150 per person.

Animals that inhabit the Galapagos Islands – Ecuador are known to be among the friendliest lot in the world. Turtles and other reptiles; plus its wide range of bird species are not afraid of humans which means that you can get close to them as they won’t scurry away when you approach.