Gamprin-Bendern is one of the most beautiful historical villages in Liechtenstein. Just like the other villages in the country, this is full of interesting sightseeing spots. 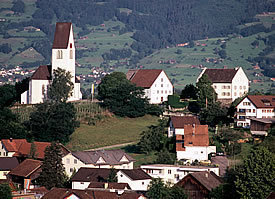 The village is at the west of Eschnerberg mountain.

Probably the best known feature of the village is the Eschnerbeg History Trail. The view afforded by this location is one of the most striking in Liechtenstein. Just as impressive are the Neu-Schellenbergh Castle ruins.

In spite of the ruins, it is still possible to capture its essence. The village is set on a hilly landscape full of lovely natural scenery. One of the best known features of Gamprin-Bendern is the “Lotzaguetle” in the Gamprin hamlet. The site is proof of a settlement going back to 4,000 BC.

The earliest form of the country was as the Lower Rhaetia sub-country, which was created in 814. The area was made a part of the Carolingian Empire. However, Vaduz was not formed until 1342. Vaduz began as a county in Werdenberg.

The 15th century saw the country being invaded by Swedish and Austrian troops. This happened during the course of the Thirty Years’ War of 1618–1648.

The area also suffered from a plague in the 17th century. In 1806, Liechtenstein became a sovereign state. The country was occupied for a while by Napoleon’s forces. But it regained independence in 1815. It joined the German Confederation, but when the Confederation dissolved, the country declared permanent neutrality.

This policy of neutrality was maintained in World War I and World War II. Experiencing economic difficulties after World War I, the country made a monetary union with Switzerland. This helped Liechtenstein recover. Today it is one of the most prosperous countries in Europe.

The daily budget required for a comfortable stay is about 100 USD. But there are many travel tours available to choose from. You can find many of them on the Net.

At the hamlet of Bendern is a hill with parsonage. It was at this place where the Liechtenstein Lower Country affirmed their allegiance to the Prince of Liechtenstein on March 16, 1699. At the church hill’s western slope is Mary’s Grotto. It is the only place of worship at the site.

Gamprin-Bendern is well known for its quiet nature spots. These are unspoiled natural locations. If you are the type who is looking for a quiet place to relax, this village will not disappoint.