Ulan Bator, also known as Ulaanbaatar or UB, is the capital city of the country. It is likewise the biggest city in Mongolia with an estimated population of more than one million.

The city is home to Gandantegchilen Kloster – Mongolia, once the center of Buddhist worship in the country. 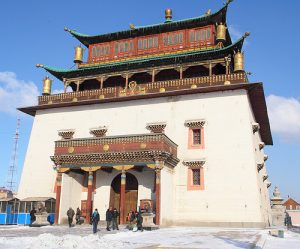 Gandantegchilen Kloster – Mongolia is located at the northwestern side of Ulan Bator, sitting atop a hill.

If you will be taking public transportation to get to Gandantegchilen Kloster – Mongolia, your best options are the buses and mini buses. These have regular runs in and around the city and charge a fixed rate as well.

You can also take a taxi to reach the complex. It is recommended however, that you haggle over the fare with the driver first before getting into the cab so you won’t be overcharged unnecessarily as some drivers are wont to do when they know that you are a tourist.

The Gandantegchilen Kloster – Mongolia is actually a complex of temples and other buildings within the compound of the monastery.

The monastery features a statue of Buddhist bodhisattva, Migjid Janraisig, which stands at 26.5 meters tall. The statue is adorned with more than two thousand precious stones and is made from copper and gilded in gold leaf.

Other temples inside the complex are the Vajradhara Temple dedicated to Vajradhara, a Tantric Buddhist; and Dedanpovran, a residence of the 13th Dalai Lama.

There are likewise several “datsan” or Buddhist university monasteries inside the complex and a library.

The Gandantegchilen Kloster – Mongolia was first established in the year 1835 by the country’s “highest reincarnated lama” at the time, the Fifth Jebtsundamba.

During the 1930s, most of the monasteries in the country were destroyed under the orders of Khorloogiin Choibalsan, a leader of Communist Mongolia. It is estimated that around fifteen thousand lamas were killed during this time.

Out of the hundreds of monasteries in the country that were destroyed by Communist Mongolia, Gandantegchilen was miraculously spared.

The statue of Migjid Janraisig on the other hand, was taken down by the Russian army in the year 1938. It was rebuilt once again in the year 1996 following donations from the locals who wanted to help fund the rebuilding of the statue.

The cost to visit the temples in Gandantegchilen Kloster – Mongolia is about T 3,500 per person. To take pictures, you will have to pay an extra charge of approximately T 5,000.

Taking pictures inside the temples is strictly prohibited but you can take photographs around the monastery. There are currently about one hundred and fifty monks living in the monastery.