The Georgian Military Highway is one of the most fascinating places tourists in the country can see. Apart from the fantastic views, the road is also a historical landmark.

Driving along the highway is a breathtaking experience. The clear blue skies and the mountain scenery dominate the view. The highway is also famous for its very steep curves. Several places can be seen along the road.

One of the most interesting is the Tsminda Sameba Church. The Georgian Military Highway will also go through Rocky Ridge and the Terek Valley. Other areas you will pass include the Darial Gorge, Mount Kazbek and the Gergeti Trinity Church. 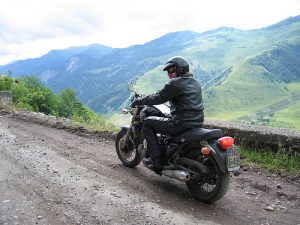 The highway’s route was established by the Russians who ruled the place during the 19th century. It goes through the same route as the old traders did centuries ago. The route has been known for thousands of years. Both Pliny and Strabo mention it in their works. The highway attained its present form beginning in 1799.

In 1801, Tsar Alexander I ordered the Russian military to improve the highway. The purpose was to make troop movement easier. The highway was finished in 1817. However, work would still continue until 1863. By this time, the cost had risen to over 4 million pounds, an incredible sum in the 1860s.

The highway would go on to play pivotal roles in the Russian-Circassian War. However, its importance would be reduced due to border crossing delays.

Travel tours to Georgia are priced according to the site you will visit, the amenities and the number of people with you. The tour of the best sites in the country (not just the highway) will cost at least $1000 for each person.

There are many other attractions along the highway. From the Trinity Church, the highway goes up to the Baidarka River. At the Jovi Pass, it reaches a height of 7815 feet (2379 m). From there you will see the Ananuri and Zemo Avchala fortresses and a hydroelectric dam.

The Georgian Military Highway also goes by the Mtskheta town. While the views are exhilarating, it is recommended that you stick only to the safe routes mentioned earlier.