The Gniezno Cathedral in Gniezno is one of the finest Polish Gothic cathedrals. It is best known for being the site of numerous coronations.

The cathedral is in Gniezno at the Greater Poland section. If you’re driving a car, the route to take is country road nr 5. You can also drive by country road nr 15 or local road nr 260. The closest airport is Poznan. This has connections all across the continent. The best route for train travel is Poznan-Gniezno-Inowroclaw.

The cathedral’s most conspicuous features are its bronze doors. These are adorned with scenes of St. Wojiech’s silver relic coffin and of his martyrdom. The cathedral is also where St Adalbert’s remains are buried.

The original style of the cathedral is unclear. Today however, it is a three-aisle Romanesque stone basilica. There are a couple of towers flanking the church. 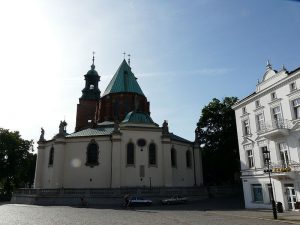 To the cathedral’s south is the Boleslaw Chrobry monument. This statue was built in 1929. It was destroyed by the Germans during WWII but was rebuilt in 1985.

The saint’s coffin was constructed by Peter von der Rennen in 1662. It was made of pure silver. Construction became necessary after the one made by King Sigismund III Vasa was stolen. The Gniezno Cathedral in Gniezno however, is best known for being the coronation place for royalty.

A single bus ticket will cost 0.45 Euros. The fee is a bit higher in the evening. You can also buy an 11 ride ticket if you move around a lot. You can also purchase one month tickets (12 Euros) if you are staying for an extended period.

The present cathedral is 22 meters wide and 85 meters long. It has suffered two fires, one in 1613 and another in 1760. Following the 1760 fire, the edifice was refurbished.

The towers were then added. It is also possible to climb the tower. Outside the cathedral is an immense statue of Boleslaw I. Not far from the statue is the original bell.

Before you go to the Gniezno Cathedral in Gniezno, check if it is undergoing some renovation. If it is, some areas like the crypt may not be accessible.