The former heavy fortification constructed by the Romans to protect England is now a popular tourist attraction. Around it are several hotels, restaurants, and tourist hotspots that travelers can check out to make their visit to the wall even more enjoyable. 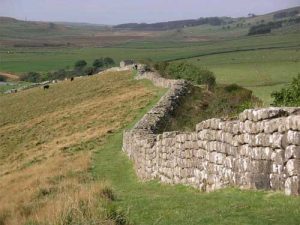 Hadrian’s Wall in Britain – United Kingdom extends about eighty – seven miles off the northern section of England. It is close to a number of towns down the countryside: Carlisle, Haltwhistle, Hexham and Newcastle upon Tyre.

Getting to Hadrian’s Wall in Britain – United Kingdom is quite easy by public transport as there is a Hadrian’s Wall Country Bus AD122 departs from the Central Station in Newcastle and goes to Carlisle, one of the towns close to the wall.

There are likewise regional buses that travel to the towns situated near the wall.

You can also take the train from Newcastle to reach your destination.

There are plenty see around Hadrian’s Wall in Britain – United Kingdom: museums, galleries, forts, baths and trails. All these will give you a closer look at the rich history covering this wall.

The Ravenglass Bath House, situated at one end of the wall, is the only remaining reminder of what was once the Ravenglass Roman Fort. The ruins of the bath house are actually among the highest Roman structures in North Britain. It stands about thirteen feet tall.

At the Senhouse Roman Museum, you will see the country’s widest collection of altar stones of the Roman military forces. There are likewise various sculptures displayed inside the museum. Views from the museum are likewise spectacular as the museum stands on a cliff.

One of the most interesting museums around the wall is the Roman Army Museum. Displays here were the result of archeological excavations in Vindolanda. Thirty – five years of excavation work yielded an authentic plume from an authentic Roman helmet plus replicas of javelins, body armours, shields and swords.

There are also film showings inside the museum where you can learn more about how the Roman military gets their recruits, among other things.

Hadrian’s Wall in Britain – United Kingdom is a fortification constructed to by the Romans to defend their colony in England. Construction begun some time in 122 AD under Emperor Hadrian.

It is actually the first fortification built by the Romans in Great Britain. The second one was the Antonine Wall. Hadrian’s Wall however is more popular between the two because not much of the Antonine Wall still stands today.

Apart from serving as a fortification, it is believed that the gates spread out across the wall also served as customs gateways for trade and taxation purposes.

The wall was designated as a UNESCO World Heritage Site in the year 1987.

Visiting Hadrian’s Wall in Britain – United Kingdom itself does not require an entry fee. To visit the museums and other attractions, specific entry fees may be charged accordingly.

Four miles off the eastern end of Hadrian’s Wall in Britain – United Kingdom, is a re-construction of the Arbeia Roman Fort. Archeological excavations are ongoing here.

You can check out the site and also explore the re-constructed fort to get a closer look at how the Roman military men lived in those days.