The Hamat Gader in Yarmouk River Valley is one of the best known tourist spots in Israel. There are several features in the site that have made it a big draw for the tourists. 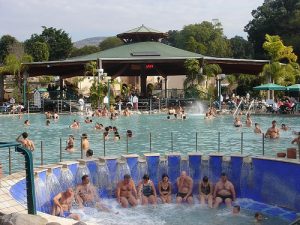 The site can be found at the Yarmouk River Valley. This is close to the Sea of Galilee. The site is near the borders of Jordan, Syria and Israel.

The site is known for its several attractive features. There are many hot springs where tourists can relax and bathe in. These baths are also said to have healing properties. There is also a synagogue you can visit.

The spring waters are known for their warmth which can reach 50 C. For those who are tired, the springs can be a perfect place to relax in. The area around the Hamat Gader in Yarmouk River Valley is also attractive.

Even before it became known as a tourist attraction, the site was known as the recreation site of the Romans. Based on the historical evidence, the building of the bath complex began in the 2nd century. The work was done by the 10th Roman Legion.

There are two construction periods known. The first is the Roman-Byzantine Period. This was when most of the complex was constructed. The second building period was the Muslim Period. This was marked by renovations to the site.

Even then, the waters were used for healing and recreation. An earthquake during the 7th century damaged the hot springs. The site was restored by the Umayyad caliph of Damascus. During the 9th century, the baths were no longer used.

Prior to 1949, the Al-Hamma village was in the area. Following the 1949 Arab-Israeli War, the site came under the control of Syria. The Six-Day War in 1967 saw Israel wrest control of the site. Since that time, the site has remained under Israeli control.

Travel packages to Israel have different price tags. A tour of the major tourist destinations will cost about 3000 USD at least.

The area is also known for its ancient artifacts and ruins. One of the most notable features of the site is a Roman theater. This was constructed in the 3rd century CE.

The Hamat Gader in Yarmouk River Valley is truly a sight to behold. If you are going to Israel, this is one of those sites that you wil want to check out.