A trip to the Hiroshima Peace Memorial will be one of the most moving experiences you will go through. Designed for the bomb victims, it was made a UNESCO World Heritage Site in 1996.

The Peace Memorial can be reached by boarding tram line 6 or 2 heading to Genbaku Dome-mae. Emerging from the JR Hiroshima Station, the park will be visible. The memorial is in the Peace Memorial Park.

The Peace Memorial has over 50 statues and memorials. The A-Bomb Dome used to be the Hiroshima Prefectural Commercial Exhibition Hall. While the people in the building were killed, the dome somehow survived.

A trip to the Hiroshima Peace Memorial Museum will reveal the events that happened after the A-bomb exploded. Items on display include before and after models of melted vehicles.

There are also some artifacts dating from the time of the explosion. The Atomic Bomb Memorial Mound contains the ashes of over 70,000 unidentified victims of the bomb.

During the city’s reconstruction, it was left unattended because it was just too big to get rid of. However, it would eventually become the symbol of the atomic bomb explosion. 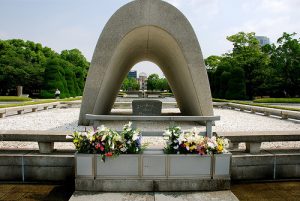 The Peace Memorial Park fee is 50 Yen for adults. For high school, elementary and junior high school students, the fee is 30 Yen. You will have to pay 300 Yen for the audio headset. The fee is only for the museum. Admission to the park is free.

Also inside the park is the Children’s Peace Monument dedicated to A-bomb victim Sadako Sasaki. The Memorial Tower to the Mobilized Students is a tribute to the 6,000 students who were killed in the explosion.

The Monument in Memory of the Korean Victims is dedicated to the Koreans who were also killed. The Peace Bell shows a map of the world minus borders. Symbolizing unity, visitors may strike the bell. The Rest House has a shop where you can buy gifts and also relax in.

Before you go on a trip to the Hiroshima Peace Memorial Museum, bear in mind that some of the artifacts and images displayed are quite graphic. A visit to the Rest House should include a request in advance.