Mali keeps a lot of interesting secrets of a great place. One of them is Hombori. Hombori, Mali is a town located between Mopti and Gao. It is mostly known for its vernacular architecture but it is definitely notable as well for its rock formations.

The average temperature at Hombori is always over 30 degree Celsius, making it one of the hottest places on earth but you must never lose heart because it has a lot more attractions than you can imagine.

As mentioned, Hombori is located between the towns of Mopti and Gao. It is in the slopes of Hombori Tondo mesa.

To get to Hombori, you can take a bus or taxi from Bamako. Since it is usually part of any Mali travel tour you can find online, transportation is pretty accessible.

Aside from a trip to Hombori itself, there is that option to take a look at the towns of Mopti and Gao, both are remarkable for many different attractions. Mopti is considered a bubbling city. It houses a beautiful mosque and a local market that offers local products that you will not be able to find elsewhere in the country. You can also hop around some of the famous bars and restaurants in Gao, especially the Bellah Rotisserie where local sausages are being served. 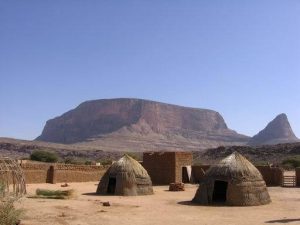 Originally, it was the members of the ethnic group Dogon who holds residency in Hombori. When the almoravides invaded the town in 16th century, a part of the royal family of Gao settled to Hombori. They are then followed by the Songhais, which constitutes the bigger chunk of the population in modern-day Hombori.

Traveling to Hombori does not cost as much as traveling to European cities. The price to pay is considerably low. That is not to underestimate the allures of the place, however. Even with only a few dollars, you will be treated to a wonderful sight altogether if you decide to visit Hombori. It offers some of the most memorable nature trips you could have in this lifetime. Plus, there’s the opportunity to get to know the West African culture and way of life.