Ilha de Mozambique – Mozambique otherwise known as Island of Mozambique, is a small coastal town within the Province of Nampula. It boast of having a historical heritage that is no like any other in the country and even in all of Africa.

Ilha de Mozambique – Mozambique is situated in the northern regions of the country, within Nampula Province. It lies between two bodies of water: the Mozambique Channel and the Mossuril Bay.

If you’re flying in, the closest airport that has commercial flights is located in Nampula. From here, you can take a bus all the way to the causeway that links to Ilha de Mozambique – Mozambique.

The buses do not cross the causeway so you will have to transfer to another vehicle, usually in the form of a chapa or a pick-up.

If you’d rather travel all the way to the island via one means of transport, you can take a chapa directly from Nampula which will cross the causeway to get you to the island.

On the other hand, if you are driving, take the road that leads to Nacala and then turn at the sign that says Ilha de Mozambique. To cross the causeway, you will have to pay a fee of roughly around 5,000MTn.

Historical landmarks and buildings are mostly found in the old part of town which is called Stone Town. 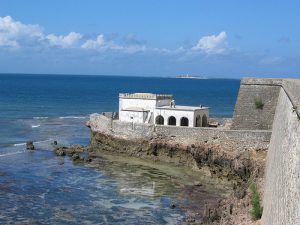 There is a museum housed within Palacio dos Capitães-Generais located in Stone Town. Here, you can learn a bit about the town’s history and view a number of historical relics on display.

At the northernmost tip of Ilha de Mozambique – Mozambique, you will also find a fort which houses the Church of Nossa Senhora do Baluarte, considered as one of the most ancient surviving European structure in the country, dating as far back as 1522.

Also close to the fort is a dive center which can take you snorkeling or scuba diving down the waters surrounding Ilha de Mozambique – Mozambique.

The Arab trader was Musa Al Big, which is a disambiguation of “Mozambique.”

The old Portuguese settlement is what is now commonly known as Stone Town was once the capital city of Portuguese East Africa, the territorial expansion of Portugal east of Africa.

There is also a campsite within the island and staying here costs only $4 for each person, per night.

For historical buildings that have entry fees, be sure to pay to the right person as there could be a few locals posing as attendants and will assure you that you will gain access to the building only to be told by the right attendant that you will have to pay again.

The bottom line is, ask for a ticket first and check it’s for the building you want to see before paying for the entrance fee.