The Inlandsbanan in Lapland is a railway in Sweden. A vital component in various industries, the system has also become an integral part of tourism in the country. 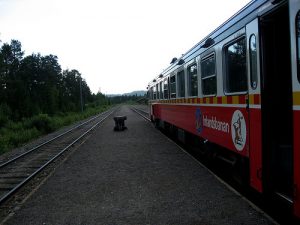 The railway stretches for 1,300 km. It runs from Gallivare at the north up to Kristinehamn to the south. The rail goes through the central areas of Sweden.

The Inlandsbanan in Lapland goes through the picturesque Swedish countryside. The journey will begin from Varmland at the south by way of Dalarna. It heads to Lapland all the way to the north. All in all, the trip will pass by 19 municipalities.

During the trip, you can explore local heritage sites. There is also plenty in nature to explore. There are also guides that will explain the scenery and places you are going through.

The idea to build the railway was conceived in 1907, but it would take several years to finish constructing it. The line was supposed to be inaugurated in 1924, but it was not completed until 1937. The service was used for many years, but was eventually mothballed. Now the service is best known for its tourism service.

There are now plans to implement a new traffic management system. There are also plans to upgrade the load capacity. Today the service runs for three months every summer season.

The service currently is made up of one south-bound and one north bound train. This is at the section of Ostersund–Gallivare. The trip takes thirteen hours and is open for freight.

Ticket costs are determined by the journey length. The rate is SEK 1.23/km. The prices will vary. However, the following can be used as a guide: Ostersund – Gällivare SEK 962, Ostersund – Sorsele SEK 495, Mora – Ostersund SEK 414 and Kristinehamn – Mora SEK 306. Reservations cost SEK 50 per individual a day.

The Eurail Pass is accepted on the railway. If you are traveling in groups, making seat reservations is necessary. The railway is periodically upgraded so it remains in good condition. Following the deregulation of railway systems in 1993, numerous services have been granted to freight companies.

The Inlandsbanan in Lapland is open for tourists starting mid June up to the end of August. During tourist season, the railway is open everyday. For the rest of the year, the railway can be opened with chartered arrangements only. The Kristinehamn – Mora stretch is open at the high season.