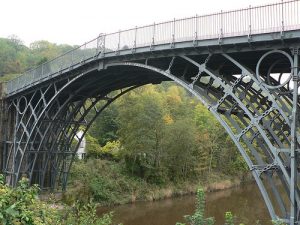 The Iron Bridge in England – United Kingdom is a structure known worldwide. It is located in the little village of Ironbridge, which is in county of Shropshire near Coalbrookedale. This village is located near the Welsh Border. There are a variety of transportation options to get to this popular destination. You can travel by air, bus, car, rail, or by air.

Traveling by air to the town of Ironbridge will be the fastest and most convenient way to travel. The nearest airports are the Manchester and Birmingham airports. However, this will still require tourists to make a one to two hour drive. Shropshire County is approximately a four hour drive from the main airports found in London.

If you plan to travel by bus then you can hop on one of the buses of the National Express. They have buses running to Shropshire from various destinations. Driving to the town will require one to take the M54 motorway. Note that you have to get off the motorway when you get to Junction 6, which is the most direct route to get to the said town.

Of course, the main attraction of the town is the Iron Bridge, which is also a world heritage site. It is known as the place where the Industrial Revolution was born. However, once you get to the little countryside town, you can easily notice that it really is anything but heavily industrial.

Both the town and the gorge take on the name Iron Bridge. The Iron Bridge in England – United Kingdom was the first cast iron bridge built in the entire world. This beautiful bridge was constructed in 1779. Its creation spawned a huge impact both on the overall economy and society in general. It is interesting that while the bridge was under construction, industrial spies as well as iron founders found their way into the construction site. It sparked interest in both travelers and artists alike.

Other than the actual Iron Bridge in England – United Kingdom, there are a lot of other attractions you’ll find in town. For instance, the Victorian town is a unique museum located outdoors. The staff manning the place dons the costumes of the said era. There are also a lot of museums and historical sites that provide people with a glimpse of life back then.

Those interested in visiting Iron Bridge in England – United Kingdom will find great value in purchasing passport tickets from the official Museum Trust in order to get the most value for their money. Tourists can purchase different tickets to the tours of the various sites. Ticket costs range from 2.60 pounds to 14.95 pounds. The said tickets are valid for a period of 12 months.

There is more to this town than just a home for historic sites. There are a lot of shopping options as well as outdoor and recreational centers. Visitors can engage in adventure activities, quad biking, and edge mountain boarding among the many other fun outdoor sports featured in the said town.