The Iron Gate in Danube Romania is a popular destination for tourists. Some of its main attractions are the dam and the hydroelectric power stations. The area is also known as the Danube Gorge in Romania. 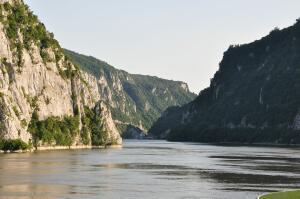 The gate is a gorge making up a portion of the boundary between Serbia and Romania. Broadly speaking, it spans an 83 mile (134 km) route. In a narrower sense, it only includes the route’s final barrier that has a couple of hydroelectric dams. That would be just beyond Orsova.

On the last barrier are the two dams, named Iron Gates I and II respectively. Both have two power stations. Since these structures were built, they have become popular tourist destinations. The gorges have become areas for cruising.

Today there are services that give you the chance to sail from Belgrade to Romania via the gates. The gorge is between Serbia to the south and Romania in the north.

To make the construction possible, 17,000 people living in five villages had to be relocated. Some settlements were forever lost. However, historical artifacts, flora and fauna are now under protection of Romania and Serbia.

Prices for Danube cruises differ. A 16 day cruise will probably cost $2,700. Of course, the cost will also be influenced by any other items on your itinerary. The more places you intend to visit, the costlier it will be.

The narrowest and most famous gorge is the Great Kazan. It narrows down to 150 meters and reaches a depth of 174 ft (53 m). On its eastern side, the Roman emperor Trajan had a bridge built by Apollodorus of Damascus.

In Serbia, the Iron Gate in Danube is known as Derdap. The final part is known there as Ðerdapska klisura. There are natural parks at the Romanian and Serbian ends.