The Jame’asr Hassanil Bolkiah Mosque is one of the grandest mosques in Brunei. Of all the mosques in the country, this is probably the best known. 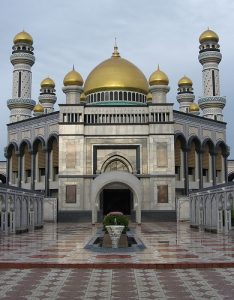 The mosque is in Kampong Kiarong. This is close to Bandar Seri Begawan, the capital of Brunei. You can get to the city by tour van, minibus or taxi. Locally the mosque is known as Kiarong.

The design of the mosque is nothing less than a monument to Islam. The main attractions of the structure are the details in both the exterior and interior. Aside from the mosque itself, the gardens are equally beautiful. The Jame’asr Hassanil Bolkiah Mosque also has many lovely fountains. All of these combine to add ambiance to the whole place.

The mosque was constructed to commemorate the sultan’s silver anniversary reign. The mosque was designed to illustrate the story of the royal dynasty.

The golden age of Brunei was in the 16th and 17th centuries, when its rule reached Borneo and the southern portion of the Philippines. Conflicts over succession, European expansion and piracy weakened the kingdom.

The country was annexed by the British in 1888. Brunei gained independence in 1984. Today, the same royal family has ruled the country for over 600 years.

The country has a semi-tropical climate, although it is somewhat sub-tropical in the capital. January is the warmest month. The temperature is between 14 to 33 C. It has a humid and mild rainy season.

Over all however, the dry and wet season are not that much different. The mountains are at the east. Bukit Pagan is the highest peak at 1,850 meters. The lowlands are located at the west. Typhoons are virtually non-existent here.

People can visit the mosque, but they have to take off their shoes first. It is also important for visitors to pay due respect to the site as it is a place for prayer. Women must wear proper and conservative dresses. Their heads must also be covered.

On Thursdays, the mosque may only be entered by Muslims. It is open on Saturdays assuming there is no official function the next day.