Jog Falls in Shimoga – India is located in one of the districts of Karnataka. It is around 30 kilometers away from Sagara and roughly 379 kilometers away from Bangalore. The folks who are interested in visiting the place have a several transport options to choose from. 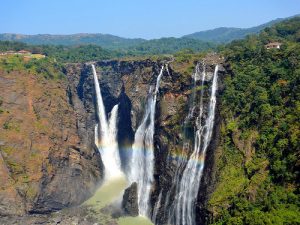 The fastest and easiest mode of transportation to Jog Falls is via an airplane from Bangalore. The Bangalore Airport is the closest airport to this tourist destination. A more common means of travel is by rail. Tourists and visitors can take the train from Sagara to Bangalore and from there to Jog taking a short trip on a public bus. There are buses that get into Jog either from Bangalore or from Sagara.

Jog Falls in Shimoga – India is one of the tallest or highest waterfalls in the country. It is also one of the major tourist destinations in Karnataka. Jog Falls is fed by the Sharavathi River. This waterfall is also known to locals as Gersoppa Falls, Gerusoppe Falls, and Jogada Gundi. Well, no matter which of these names you choose to call it, the locals will definitely know which waterfall you are actually looking for.

As you might have guessed, the trek to the Jog Falls is already quite astounding, giving visitors a chance to see the natural landscape of the area. The waterfalls themselves are quite a site and are truly big treats for nature lovers or anyone who can easily appreciate the outdoors.

Other than waterfall hunting, there are also a number of attractions where visitors can stop by. After the trek to Jog Falls in Shimoga – India, visitors can take a short detour and visit the ancient temples in Sagara.

Another interesting place for nature lovers is the small town of Siddapura where visitors can get an astounding panoramic view of the Sahyadri mountain range. Those who are more into waterfall hunting can head right on to the hill station of Sirsi where people can access the other waterfalls in the area.

The Jog Falls in Shimoga – India was formed by the natural flow of the Sharavathi River. The fall’s water source lies 253 meters above it. Due to the construction of the nearby dam, the amount of water coming into the falls waded. Thus visitors at one time complained that they only saw thin streams instead of a full fledged waterfall. However, during the hard monsoon rains of 2007, the strong flow of water and full majesty of these waterfalls are now seen again.

Travel arrangements to Jog Falls in Shimoga – India and a guided tour can be arranged with any travel agency. A three-day tour will cost some $180 for one person.

The best time of the year to visit Jog Falls is between the months of August to December. Other popular tourist destinations near these waterfalls are Lion Tiger Reserve where visitors can go on a safari tour, Tunga Anicut Dam, and Honnemaradu, which is a popular place for water sport enthusiasts.