Dubai is the most progressive and well – developed of all seven emirates within the United Arab Emirates in terms of trade and tourism. As such, there are many tourist attractions in the emirate that you can find nowhere else in the world.

One of these is the Jumeirah Mosque in Dubai – United Arab Emirates. 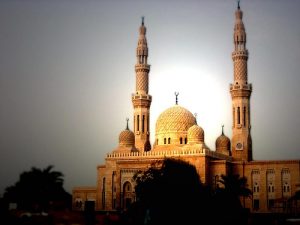 Jumeirah Mosque in Dubai – United Arab Emirates is located in the district of Jumeirah along Jumeirah Road, Jumeirah 1. It lies opposite the Palm Strip Mall.

If you wish to take the metro, there are twenty – one metro stations spread out across the city. The metro includes stops along the coastline of the emirate and gives you easy access to the mosque.

For buses, you can take Line 8 which will directly take you to Jumeirah; from which it is an easy walk to the entrance of the mosque. There is also a hop – on hop – off type of bus ideal for tourists.

For this type of bus, take the blue line as this one passes through Jumeirah.

On the other hand, if you wish to directly stop in front of the mosque, you can either take a taxi or a car hire service.

This mosque provides an excellent example of Muslim architecture with the interiors adorned with Arabic calligraphy. The mosque, although the largest in the emirate is actually very modest as compared to other mosques in the UAE with elaborate designs and adornments.

What it lacks in decorative elements, it makes up for the mind – opening tour that allows non – Muslims to understand the customs and traditions of the Islamic world hence; bridging the gap between the two.

Jumeirah Mosque in Dubai – United Arab Emirates was constructed some time in the year 1978. Its design takes after the medieval Fatimid architectural pattern; made of white stone and adorned with two minarets that adorn the central dome on each side.

Tours are conducted by the Sheikh Mohammed Centre for Cultural Understanding with the aim of providing a more in – depth look at the Islam culture and thereby promoting a better understanding of Islam.

To join the organized tour of the Jumeirah Mosque in Dubai – United Arab Emirates, there is a fee of about 10 AED.

Organized tours are conducted every Tuesdays, Thursdays and Sundays at ten in the morning. There is a Q & A portion afterwards for more information about the mosque and the Islam culture and religion.