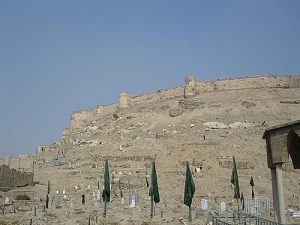 The fortress is situated in Kabul. It is one of the most recognizable structures in the country, so any taxi driver can take you there.

Probably the most impressive feature here is the Walls of Kabul. It is 12 feet (3.7 m) thick and 20 feet (6.1 m) high. The walls begin at the fortress and go up to a mountain ridge. Aside from the Walls, there are large gates.

Those looking at the fortress wall will see that there are different layers of materials used for building. This was due to the repeated fortification of the Kabul Bala Hisar. At the top of the hillside are the wreckage of tanks and other war equipment.

The fortress was originally separated into two sectors. The upper fortress housed the Kabul dungeon and the armory. The dungeon was called the Black Pit. The lower fortress was built to house the three royal palaces, barracks and the stables.

The fortress was built in the 5th century AD. The structure is best known for being the scene of the bloodiest battles of the 19th century. The First Anglo-Afghan War (1838–1842) saw the Afghans fighting off the British invaders. Another war, the Second Anglo-Afghan War (1878–1880) also took place here.

In 1839, the British utilized it as their barracks. This carried on until the British Mission were killed by the Afghan troops in 1879. The Second Anglo-Afghan War saw the fortress suffer damage. In 1880, the fortress was heavily fortified, but the British eventually left the country.

Taxis rarely have meters in Kabul. 50 AFN (1 USD) is good enough for a 2 to 3 km ride. This is applicable only if the road is in ideal condition.

Aside from the tank wreckage, you will see that the tunnel is constructed atop the hillside. There is also an underground storage where you can see trenches dating from wars ago. At the top of the hilltop is the Afghan flag.

If you are going on a trip to Kabul Bala Hisar, make sure to exercise all safety precautions. You can visit the fortress anytime you like. Just make sure that you do steer clear of any military convoys. Do not photograph any military personnel or installation either.