The Kalalin Pass Majuro is one of the best dive locations in the Marshall Islands. There are many diving sites around the islands, but many divers consider this one of the very best. 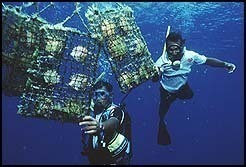 The Marshall Islands are situated in the middle of the Pacific Ocean. They are to the north of the Equator and to the west of the International Date Line.

The coral reefs is what draws divers to the site. The highlight is the “aquarium”, where you will see different types of fish and corals. The Pass, as it is locally known, has depths ranging from 30 to 130 feet.

The site is especially suitable for drift drives. The clear visibility makes it very easy to see the fish and the steep coral reefs. The Kalalin Pass Majuro has literally hundreds of fish species. You will see gray reef sharks swimming in the waters. There are also plenty of eagle rays, green sea turtles and jacks.

The earliest known inhabitants of the Marshall Islands were the Micronesians. These people settled on the islands during the second millennium. However, there is not a lot known about these people.

The Spaniards were the first Europeans to come to the islands, beginning with Alonso de Salazar in 1526. He was followed by Alvaro de Saavedra in 1529 and later on Miguel Lopez de Legazpi. In the late 1700s, the English and the Germans came to the islands.

A few months prior to the attack on Pearl Harbor, the Kwajalein Atoll became the administrative center Japanese 6th Fleet Forces Service. Their purpose was to guard the Marshall Islands. In 1944, the US took over the islands. The end of the war saw the island becoming part of US territory.

Standard visas cost 25 USD, while the business visas cost 50 USD. When you leave the islands, there is a 20 USD tax. If you want to rent cars while in Marujo, the cost will be around 60 USD daily.

The Pass is home to diverse types of fish and marine life. For instance, it is not unusual to see as many as three different shark species when diving. Commonly sighted is the Silvertip shark which is 8 ft long or more.

Diving at the Kalalin Pass Majuro can be a great experience for the novice and seasoned diver. If your are a new diver, it is best if you have a guide to help you navigate the waters.