Khartoum – Sudan is the capital city of the country as well as the capital of Khartoum State. Exploring the sights and shopping are popular here among tourists who come to visit by the thousands every year. 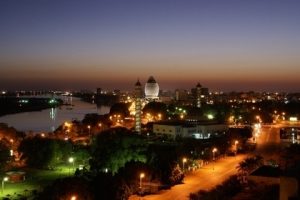 Khartoum – Sudan is located at the point where the Blue and White Nile Rivers emerge, in the North-East African Region.

You can fly in to Khartoum – Sudan via the country’s main airport which is located right in Khartoum. From the airport, you can take a taxi to reach the city center.

About two hundred meters from the airport, just outside the terminals are minibuses. These can also get you to the city center or to your accommodations.

If you will be coming from other cities in Sudan, your best option is to take a bus to reach Khartoum. While there are car hire services that you can rent, unless you are confident about driving around Khartoum’s chaotic traffic, buses are the best choice.

Khartoum – Sudan is abundant in many historical landmarks, some of which are now homes to museums. For most tourists, their first stop is the Nile Street. Here, you can view the Presidential Palace; see some old colonial buildings which are now schools and places of worship; and the National Museum of Sudan.

You can also visit the Presidential Palace Museum and also watch the Changing of the Guard each 1st Friday of the month.

For shopping, head down to Souq Arabi where you can find numerous shops selling a wide variety of items. Shopping here is made easy by the divisions of the marketplace so you’ll know exactly where to go when looking for specific items.

For arts and crafts, your best option is to go to Souq Omburdman.

In the year 1821, the son of Egyptian Ruler Muhammad Ali Pasha, Ibrahim Pasha made Sudan part of his domain. Khartoum was originally designated as an outpost for Egypt’s army but it soon became a major port for slave trade.

In the year 1899, Khartoum – Sudan was designated as the capital city of Anglo-Egyptian Sudan. Sudan gained its independence only in 1956.

Khartoum came down in historical infamy when in 1973, the group Black September took 10 hostages, including 5 diplomats. The Ambassador and the Deputy Ambassador of the United States as well as a Belgian diplomat were murdered during this hostage crisis.

Before booking your hotel room, ask if the price is already inclusive of five percent tourism tax and fifteen percent VAT. Some hotels will not inform you right out whether or not their rates are all-in.