The Khor Al Udaid Beach is one of the loveliest beaches in Qatar. The site is best known for its stunning sand dunes. 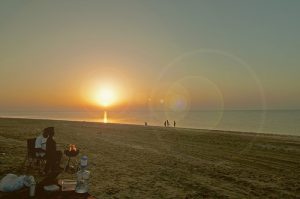 The beach is 78 km away from Doha. It is at the southeast part of Qatar.

The dunes here are of an immense height, reaching over 40 meters. The pristine waters are also a major attraction. This beach also has long been admired by the locals, who call it the Inland Sea.

The unique features of the site is due to the distinct geomorphologic and geological formation that occur nowhere else. Apart from the dunes, the Khor Al Udaid Beach is known for its coastal sabkha and the salt hummocks. The rocky outcrops are also attractive as are the elevated mesas.

Of course, tourists will also get to enjoy the waters. The pure
waters make them a good place to go swimming.

There is evidence the land of Qatar had been inhabited as long ago as 50,000 years ago. These ancient people were Stone Age individuals who created settlements and encampments.

About 20 km north of Doha in Wusail, artifacts like burial mounds and rock carvings have been discovered. It is also the belief of archaeologists that the land may have been influenced by the Dilmun civilization. It was around the towns of Al Bida, Fuwayrit and Al Huwayla that Doha slowly developed.

The early inhabitants of the city were African slaves and nomadic Arabs. The peninsula was ruled by the Portuguese from 1517 to 1538. The area would fall under the rule of the Ottoman Empire. The discovery of oil would soon turn Qatar into one of the economic powerhouses in the region.

There are other features in the beach. The stony deserts are worth exploring, as well as the tidal system. There are also different kinds of flora and fauna in the site. The flora are typical of what you will find in the Arabian Peninsula.

The fauna in the Khor Al Udaid Beach are varied. These include the Arabian Oryx, Arabian gazelles, ospreys and turtles. Migratory water fowls and other birds also go to the site frequently. Aside from being a beach, the place is also a good place to see some wildlife.