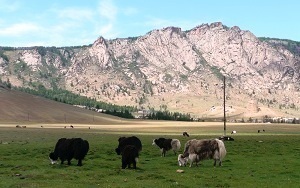 Due to its location, you cannot reach the place using an ordinary vehicle. The best way to reach the site is by hiking or going on a riding tour. There are many tour operators that can take you there.

While the place is difficult to reach, you will be rewarded with a striking view. The meadow around the area provides a stunning vista of the natural scenery. Aside from its beauty, the environment is also very serene, ideal for relaxation. The site is at a plateau on a slope on a mountain.

All around you, you will see an enchanting forest. The Khyatruuni Rashaan spring is alpine in nature. There are blooming meadows, granite boulders and larch wood. You will also see cold and hot mineral springs coming off the rocks.

The land of Mongolia has been ruled by several empires including the Gokturks, Xianbei, Rouran and Xiongnu. In 1206, Genghis Khan established the Mongol Empire. Following the end of the Yuan Dynasty in 1368, the inhabitants of the Mongols became embroiled in internal conflict.

The 16th and 17th centuries saw Mongolia become influenced by Tibetan Buddhism. The end of the 17th century saw the country ruled by the Qing Dynasty. The Qing Dynasty collapsed in 1911, resulting in Mongolian independence.

But it continued to struggle until 1921. It was not until 1945 that Mongolia was recognized internationally. It quickly came under the influence of the USSR. When the USSR and Communism collapsed in Eastern Europe, the Mongolian Democratic Revolution began in 1990.

There are many tour packages to Mongolia available. An 11 day tour of the country will cost USD 1790. A 4 day tour will cost around USD 500. A two week tour costs around 2000 USD.

The hot spring water is said to have healing properties. The Buddhists have set up a small temple in honor of the hot spring waters. Each area of the spring can produce different effects. There are log cabins and bath sheds so you can have private baths.

Khyatruuni Rashaan spring does not have any facilities or infrastructure. Make sure to bring food and drinks with you. But you can stay there overnight if you have a tent.